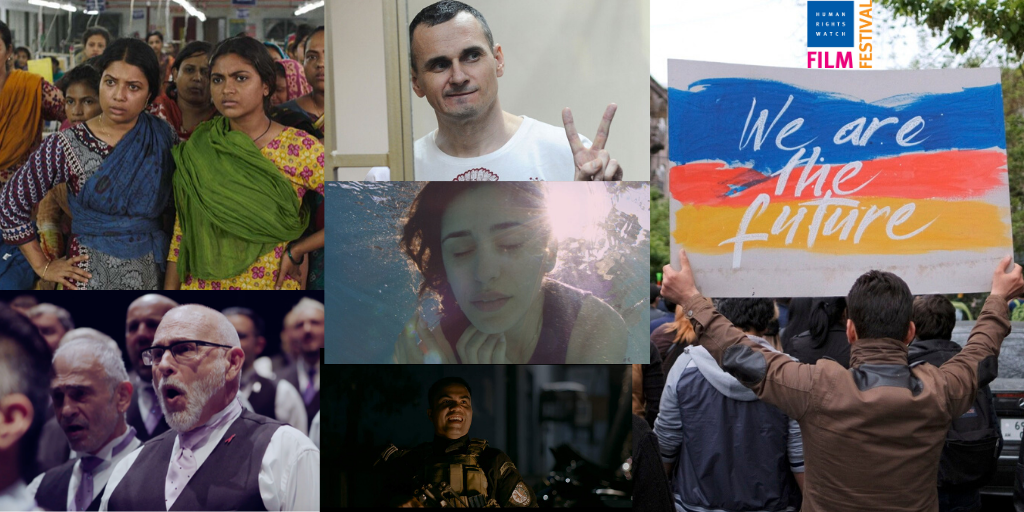 Tickets are free and must be reserved in advance
Hot Docs Ted Rogers Cinema website
on a first-come-first-served basis.

The festival, in a new partnership with Hot Docs, will present six free timely and provocative films, with an additional three films specially selected for daytime school screenings.

The films were selected to shine a light on bravery and resilience in challenging times, with incisive perspectives on human rights issues affecting people around the world. As racism and xenophobia continue to rise within the highest echelons of power, this year’s festival presents cinematic works that expose and humanize legalized and legitimized oppression of the disenfranchised that demand the world’s attention. The films were selected to celebrate diversity of content and perspective.

“We are grateful to Hot Docs for our new partnership in presenting this festival about knowledge and hope in the face of fear, oppression, and even violence in many areas of the world,” said Helga Stephenson, chair of the Toronto Human Rights Watch Film Festival. “For the first time we will have three school screenings to educate our young people about the world around them.”

All screenings will be followed by in-depth panels with filmmakers, film subjects, Human Rights Watch researchers, and special guests.

“This year’s film festival demonstrates the resilience and intelligence of ordinary people as they take on extreme political movements and individual cases of discrimination to change their world,” said Jasmine Herlt, managing director of Human Rights Watch Canada. “They demonstrate their courage and dignity as they stand against world leaders stoking fear and hatred, and against people in their own communities who balk at the notion of diversity.”

“We’re very pleased to be partnering with Human Rights Watch Film Festival for their 2020 edition,” said Hot Docs president Chris McDonald. “These impactful and eye-opening documentaries are important for people to see, and we’re happy to showcase these crucial world stories to Toronto audiences with these free screenings at our Cinema.”

The Human Rights Watch film festival will present stories from the front lines of human rights battles in Armenia, Philippines, Bangladesh, Iran, and the American South.

Opening night features Garin Hovannisian’s I Am Not Alone, which documents the popular uprising in Armenia against corruption. This year’s edition also features James Jones and Olivier Sarbil’s On the President’s Orders, an illuminating investigation into the inner workings of President Rodrigo Duterte’s brutal “war on drugs” in the Philippines, and David Charles Rodrigues’s Gay Chorus Deep South, chronicling the tour of the American South by a gay men’s choir to combat the new anti-LGTBQ laws.

Maryam Zaree’s Born in Evin deals with the ways in which people heal as she takes viewers into the world of the notorious Iranian political prison where she was born. Askold Kurov directs The Trial: The State of Russia vs. Oleg Sentsov, a documentary about Ukrainian film director Oleg Sentsov, arrested by the Russian FSB in Crimea and sentenced to 20 years in prison on contrived charges. The festival closes with Rubaiyat Hossain’s Made in Bangladesh, offering a glimpse into the world of clothing manufacturing and the changes needed in that industry.

The special school screenings include Hans Pool’s Bellingcat – Truth in a Post-Truth World, which follows the rise of citizen journalism to find the truth behind the stories, John Mercer and Tim O’Donnell’s Life Without Basketball, the story of a young Muslim woman basketball player’s fight against the discrimination she faces on the court, and Maya Newell’s In My Blood It Runs, about a young Aboriginal boy and his struggle to fit in while respecting his ancestry.

In March 2018, after changing the constitution to bestow new powers on the prime minister, Serzh Sargayan, installed in that role, had full dominion over Armenia despite having served the maximum two terms as president. This challenge to the fledgling democracy was picked up by Nikol Pashinyan, a parliament member, head of the Civil Contract Party, and a former journalist who had been imprisoned for inciting public disorder in rallying people against Sargayan’s rule. With extensive access, including to Sargayan, Hovanissian follows Pashinyan as he once again hits the streets to foment revolt in this must-see film for anyone eager to make sense of recent history.

In 2016, President Rodrigo Duterte announced a “war on drugs” in the Philippines, setting off a wave of violence and murder targeting thousands of suspected drug dealers and users. With intimate access both to police officials implicated in the killings and the families destroyed as the result of Duterte’s deadly campaign, On the President’s Orders is a shocking and revelatory investigation into the extrajudicial murders that continue to this day. Entering a murky world of crime, drugs, and politics, the filmmakers have managed to capture the clear trajectory of what depths those who wield excessive power can reach when attacking those who have the very least.

In response to a wave of discriminatory anti-LGBT laws and the divisive 2016 election, the San Francisco Gay Men’s Choir embarks on a tour of five southern US states. Thirty-three states in the US now have laws on their books allowing the firing and eviction of LGBT people based on their sexual orientation. The film includes personal stories of southern members of the choir confronting their own families about their sexual orientation and addresses the larger political issues involved using performance as a medium to instigate discussion amid a heated political climate.

Discussion to be led by Graeme Reid, director of the Lesbian, Gay, Bisexual, and Transgender Rights Program at Human Rights Watch.

When she was 12 years old, the actress and filmmaker Maryam Zaree found out that she was one of a number of babies born inside Evin, Iran’s most notorious political prison. Zaree’s parents were imprisoned shortly after Ayatollah Khomeini came to power in 1979, a period in which tens of thousands of political dissidents were arrested and tortured. With Born in Evin, she confronts decades of silence in her family and explores the circumstances of her birth. On this vulnerable, lyrical journey, Zaree considers the impact of trauma on the bodies and souls of survivors and their children, leading her to question how her generation can relate to their own history while also respecting the people they love who prefer to heal in silence.

In August 2015, Ukrainian film director and Maidan activist Oleg Sentsov was sentenced to 20 years in prison in Siberia for terrorism. He was charged with leading an anti-Russian terrorist movement and planning attacks on bridges, power lines and a monument of Lenin. Sentsov defends himself courageously and responds to the verdict with an emphatic denial of the crimes and instead accuses the accusers themselves.  In his documentary, Askold Kurov investigates the truth behind this political show-trial and documents the solidarity shown to Sentsov by filmmaking colleagues and the European Film Academy, which is beginning its 30th anniversary with this screening to campaign for Sentsov’s release.

Discussion to be led by Marcus Kolga leading Canadian expert on Russian and Central and Eastern European issues.

This film, made by a director who is also a professor and women’s rights activist, is the story of the women in Bangladesh who make our jeans and T-shirts. Authentic to its core, the film explores not only the exploitation of the women workers and the difficulty of life in general in Bangladesh but also their possibilities for empowerment and change. Against seemingly impossible odds, one worker takes on the establishment.

ABOUT HUMAN RIGHTS WATCH CANADA
Human Rights Watch is one of the world’s leading independent organizations dedicated to protecting the human rights of people around the world. We work tenaciously to lay the legal and moral groundwork for deep-rooted change and fight to bring greater justice and security to people around the world.
In 2002, Human Rights Watch Canada was established to advance education on human rights issues both in Canada and around the world, and to increase support for the work of Human Rights Watch worldwide.
The Canadian office organizes several larger public and smaller private events throughout the year. This includes our annual Toronto Human Rights Watch Film Festival, which demonstrates the power of film in raising awareness of human rights issues across the globe. The film festival brings to life human rights abuses through storytelling in a way that challenges us all to empathize and demand justice for all people. To learn more about our work or make a donation, please visit www.hrw.org/canada.

ABOUT HOT DOCS
Hot Docs is a not-for-profit organization dedicated to advancing and celebrating the art of documentary and creating production opportunities for documentary filmmakers. Hot Docs Canadian International Documentary Festival, North America’s largest documentary festival, conference, and market, will present its 27th annual edition April 30 to May 10, 2020, and will welcome audiences of over 228,000 and more than 2,600 industry delegates. Year-round, Hot Docs supports the Canadian and international industry with professional development programs and a multi-million-dollar production fund portfolio, and fosters education through documentaries with its popular free program Docs For Schools. Hot Docs owns and programs the Hot Docs Ted Rogers Cinema, a century-old landmark located in Toronto’s Annex neighborhood and the world’s first and largest documentary cinema.

ABOUT HOT DOCS TED ROGERS CINEMA
Owned and operated by Hot Docs, Hot Docs Ted Rogers Cinema is the world’s largest documentary cinema. The cinema is a year-round home for non-fiction film and storytelling, presenting first-run international and Canadian documentaries, curated film and speaker series, signature events including Hot Docs Canadian International Documentary Festival, Hot Docs Podcast Festival, and Curious Minds Weekend, as well as hosting some of the city’s premier festivals and events. Since assuming management in 2012, Hot Docs has screened over 1,425 films to audiences of more than 1.3 million. In 2016, a generous C$5 million donation from Rogers Foundation enabled Hot Docs to purchase this venue.

For more information about the film festival, please visit:
https://ff.hrw.org/press

For more information about the school screenings, please visit: https://hotdocs.ca/p/dfs-hrwff