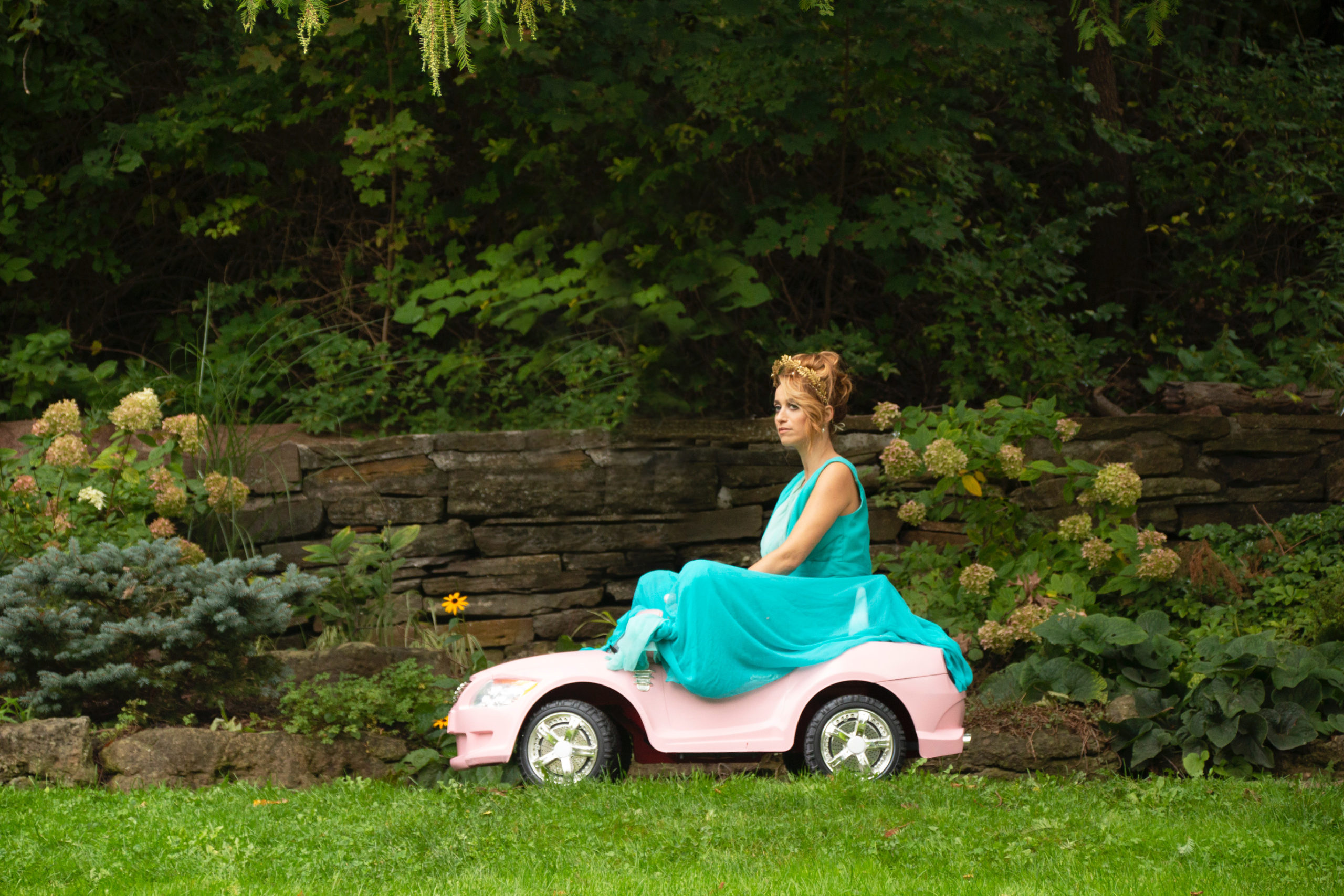 You know a wedding really is primed to be the most beautiful day of one’s life, when even the bird droppings are pink.

But, though she’s adorned in an angelic dress that Aphrodite would approve, Joey (Lucie Guest) is clearly troubled.

The tableau in front of her, features a Classical arch, and the important people in her life dancing giddily in slow motion. Prominent among them: her husband-to-(maybe)-be Trey (Daniel Stolfi), whose come-hither look seems more like a leer, a warning as he takes turns dancing with bridesmaids.

Trey has been unfaithful, but this isn’t ultimately why Joey pulls him aside to tell him the wedding’s off. “There are some flowers that shouldn’t be together,” she tells Trey in French. And off she goes, on a trance-like quest to find herself.

Jessica Hinkson and Laura Nordin’s impressionist and irreverent short film Joey is practically a dream within a dream, a fanciful and colourful tableau of thoughts and doubts, expressed by everything from friends who read her mind to inner voices that quote Patti Smith lyrics.

Awash in colour, courtesy of cinematographer Gabriela Osio Vanden, and a playful pop-score by Janal Bechthold, Joey is “an exploration of fantasy colliding with reality,” the filmmakers say.

“The dream, rooted in her past and present experiences, tell her what is real is not as important as what is true in her heart.

“We hope we have created a dreamscape of enduring mystery. This world is an extension of our inner explorer. It is wondrous, absurd and playful. It’s the amusement park ride that is our inner life.”

About Jessica Hinkson
If you’ve got your finger on the Pulse of the Canadian showbiz scene, you will have seen & loved Jessica in the original co-creation of “Charlie & Yoni” – which rocked the CBC Comedycoup Competition in 2014 and solidified her place as a creative force to watch. Since Then Jess has continued to create and star in numerous award-winning short film projects. She is the co-creator/story editor/star of the multi-award winning short film “Jessica Jessica” now streaming on CBC Gem, Amazon Prime (US & UK) &  Omeleto (Europe & Worldwide). Currently you can catch Jess in Lowell Dean’s “Another Wolfcop” as Dr. Ilsa Brundel alongside That Kevin Smith & Yannick Bisson, &, upcoming, Carinne Leduc’s “Home”. As an author, Jess’s writing has been published in Notable Life & The Elephant Journal. she is currently working on a literary deal for her first book that she co-authored, “Love Your Yoni”.  She is also a mentor for WIFT-T’s mentorship program. In 2019 Jessica directed a music video for multi-award-winning folk musician Andrea Ramolo: a re-imagination of Leonard Cohen’s iconic “Suzanne”. You can catch it on EXCLAIM.ca. JOEY, one woman’s irreverent odyssey on her wedding day, is Jessica’s directorial debut.

Blue Ice Docs presents THIS IS NOT A MOVIE, a film by Yung Chang, opens across Canada starting March 14.