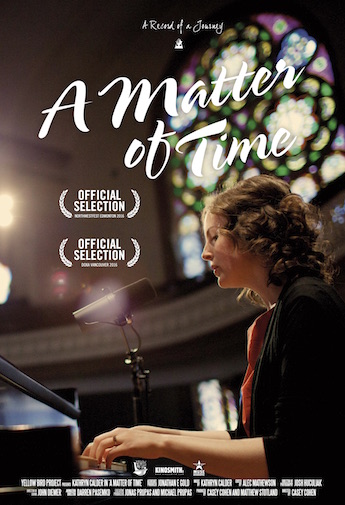 A MATTER OF TIME
Directed by Casey Cohen

Following its Canadian Premiere at DOXA in Vancouver, and Northwestfest in Edmonton, where it was awarded the BEST FIRST FEATURE, A Matter of Time, returns to Vancouver for a special one-night screening on July 31 at 6pm at the RIO Theatre. Kathryn Calder will be in attendance and will perform before the film screening, and then be a part of a Q+A following the screening.

The film is an ode to musician Calder’s mother, that is both heart-breaking yet hopeful as it examines the power of love and music, that occurs when two forces intersect with the most challenging moment in a young musician’s life.

In 2007 while The New Pornographer’s – Canada’s biggest indie rock band – were touring the world, Calder received devastating news that her mother Lynn, has ALS, and only two to three years left to live. Kathryn makes the decision to stop touring, move in with her mother, and not only become her key caregiver, but also sets up a studio on the main floor of the house, and begins to write and create music for an independent album dedicated to her mother.

About KinoSmith
KinoSmith Inc., is an independent Canadian film distribution and marketing company founded in 2007 by distribution veteran Robin Smith. KinoSmith is also home to the Hot Docs Collection that releases award-winning documentaries curated by the Hot Docs Festival in Canada. KinoSmith recently teamed up with the Blue Ice Group to start a new global distribution entity called Blue Ice Docs. KinoSmith’s recent releases include IRIS, HOW TO CHANGE THE WORLD, and BIKES VS CARS. Coming up in 2016 are THEORY OF OBSCURITY: A FILM ABOUT THE RESIDENTS, THE SHOW OF SHOWS and GAYBY BABY.

Citizen Jane: Battle For The City, directed by Matt Tyrnauer