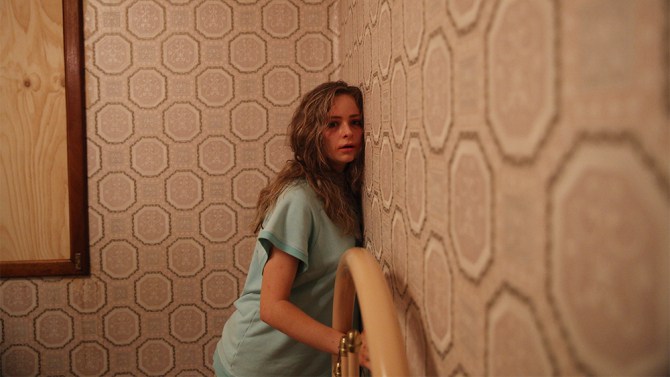 It’s 1987, and a seemingly typical Australian suburban couple have a secret hobby – kidnapping schoolgirls and murdering them. But their latest desperate victim finds ways inside their heads.

That’s the premise of Hounds Of Love, the debut film from writer-director Ben Young. Loosely based on real-life events in suburban Perth, Hounds Of Love has transfixed and unsettled festival audiences in Venice and at SXSW with its artful depiction and layered approach to the psychology and pathology of two needy murderers.

Young’s approach has been critically compared to that of David Lynch, and the acclaim Hounds Of Love has received has led to studio film offers (including the Universal Pictures sci-fi thriller Extinction).

In Hounds Of Love, a demented ritual is undertaken by Evelyn and John White (Emma Booth and Stephen Curry), a troubled mother who has lost custody of her children, and her psychopathic boyfriend. With one recent murder under their belt, they cross paths with Vicki (Ashley Cummings), a rebellious teen who has snuck away from her recently-divorced mother and is en route to a party. Deceived by Evelyn and John under the rouse of a drug deal Vicki is tricked, drugged and chained to a bed in their home.

What follows is a subtle and desperate negotiation of sorts through which Evelyn’s doubts and John’s jealousy can be exploited.

A la Psycho, the murders and violent abductions in Hounds Of Love are never explicitly depicted, but are real enough to create a tension in audiences that has been described as, “almost unbearable,” yet “brave audiences will be rewarded.”

As for the events in the film, Young says they are inspired by many similar murders, but utterly fictionalized.

“I read books about true crimes and female murderers around the world” continues Young. “What I took from them was a richer insight into the people who committed these horrible crimes. And then I made it all up.

“I’m a huge moviegoer. And when I write a film like this, I write it for my friends and me, the kind of stuff that keeps us at the edge of our seats and our stomachs knotted. So the audience and I are kind of one in that regard.”