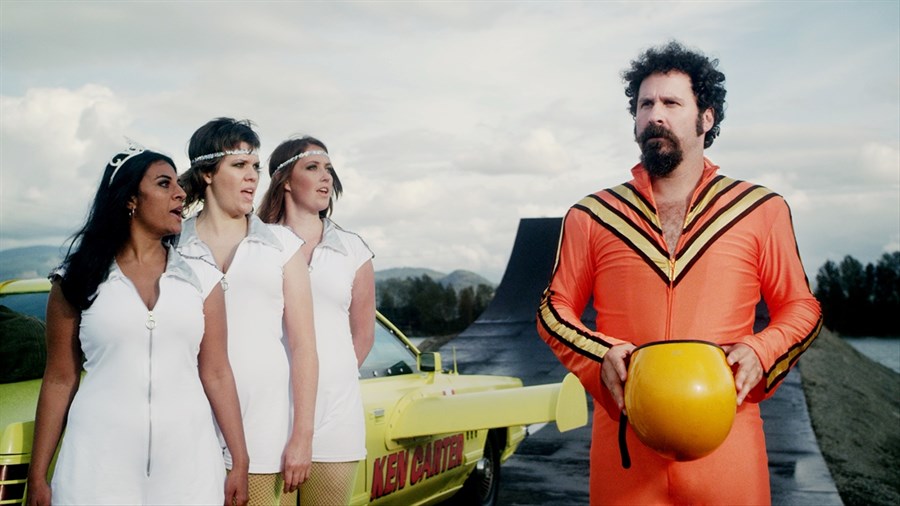 “There’ll be a fifteen hundred foot take-off ramp over there. And we’re gonna plant about two hundred square feet of roses… approximately where we’re gonna land. It’s a touchy situation. So we gotta AIM FOR THE ROSES.”
– Ken Carter

Aim For The Roses
a film by John Bolton

John Bolton and Mark Haney are available for interviews

With its wheels still turning from a hot run at Hot Docs and DOXA, John Bolton’s Aim for the Roses starts its Canadian theatrical run starting in Vancouver on Friday, December 2 at Vancity Theatre.

In 1976, Canadian daredevil Ken Carter announced his intention to fly a rocket-car a mile from the banks of the St. Lawrence to U.S. territory on the other side. His vision was to land cushily on a field of roses. The great Evel Knievel called it, “the daredevil stunt to end all daredevil stunts.”

Time has largely erased the ill-advised stunt from modern memory. But in 2008, eccentric Vancouver musician Mark Haney commenced an epic (and some thought equally-insane) Carter-commemorative concept album for double bass, with stream-of-conscious monologues and songs, all set to a melody based on the irrational number Pi.

The two quixotic obsessions – 30 years apart – converge in Bolton’s audacious Aim For The Roses, an artistically-infused documentary that tells both improbable stories in lyrical and connected fashion. Carter’s saga is told in copious archival interviews, footage and contemporary expert witness. It is also filtered through the prism of Haney’s creativity (along with Haney’s own story of his dissatisfaction with the “normal” life of a bassist and his burning need for a redemptive creative challenge).

Filmmaker Bolton fuses these two epic fool’s errands with the help of a Who’s Who of the Vancouver music and theatre community, who bring Haney’s record to life in musical numbers shot on the main drag strip of a raceway and on and around replicas of Carter’s ramp and car. Characters include the Statistician, Evel Knievel, the Fuel Tank Team, the Ramp Engineer, the Assistant Manager of Westgate Speedway and the Chorus Members.

“The best metaphor I’ve got is, ‘Errol Morris and Philip Glass meets Super Dave Osborne,’” Bolton says. “As different as they were, I certainly think an element of mad genius was at work with Mark Haney and Ken Carter. And it can be contagious.”

“Not very often does a documentary like Aim For The Roses come around,” says Robin Smith of Blue Ice Docs, “and when it does, it’s a no-brainer for us to want to pick it up. A film about a crazy daredevil, a crazy talented musician, and an award-winning filmmaker who was crazy enough to bring this to light –  Canadian audiences will get a real kick out it.”

Bolton also impressed Berlin’s Monoduo, as sales agent to sell this one-of-a-kind film for the rest of the world. “Aim For The Roses is one of the most creative documentaries we’ve seen in a long time,” says Monoduo’s Ben Bassauer.

Aim For The Roses is produced with support from the Canada Council for the Arts, and the British Columbia Arts Council.

About JOHN BOLTON & OPUS 59 FILMS:
OPUS 59 FILMS is the production company of John Bolton, an award-winning filmmaker from Vancouver, Canada preoccupied with revelation, consolation and transcendence, sometime even in that order.  He produces, writes and directs dramas, documentaries, performing arts pieces and the occasional disaster film. Read more http://www.opus59films.com/about/

About Mark Haney:
Mark Haney has been attached to a double bass for over 25 years, and there are no indications he will escape anytime soon. During that time Mark has been fortunate to perform across Canada with a wide variety of artists and groups enabling him to explore Canada’s vast terrain, musical and physical, and develop his passion for Canadian stories.

About BLUE ICE DOCS:
Founded in 2014 in partnership between Robin Smith, president of KinoSmith, and Blue Ice Group co-owners, Steven Silver and Neil Tabatznik, Blue Ice Docs uses the expertise and skills of both organizations to acquire, fund and develop a wide variety of non-fiction projects from around the world. Upcoming releases from Blue Ice Docs include OBIT, KATE PLAYS CHRISTINE, BUGS, AUTHOR: THE JT LEROY STORY, and FONKO.