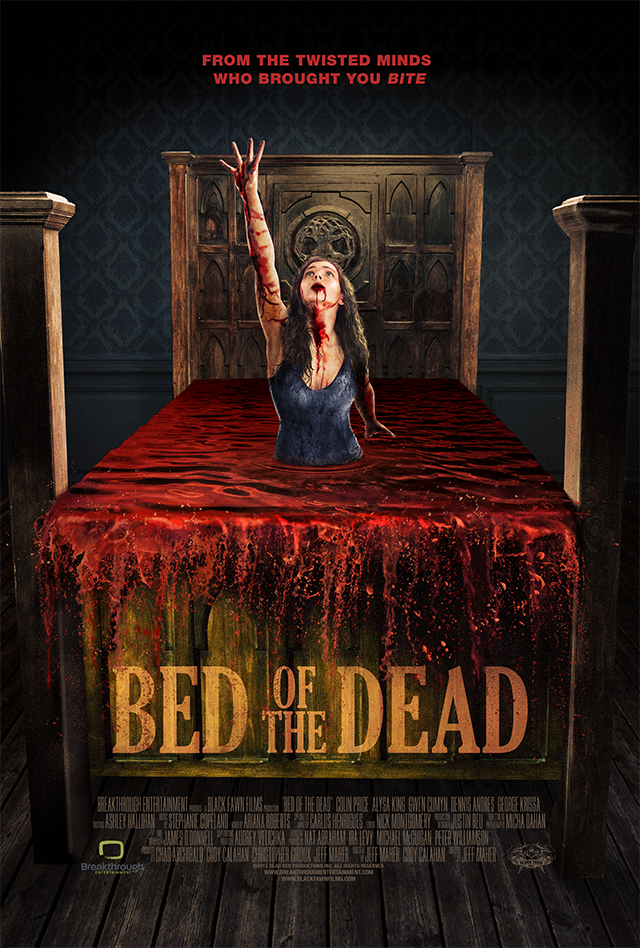 BED OF THE DEAD
Directed by Jeff Maher

From Breakthrough Entertainment and Black Fawn Films – the team behind the breakaway indie-hits Antisocial, The Drownsman, and BITE – comes BED OF THE DEAD, directed by Jeff Maher (Cinematographer of Antisocial, BITE, Let Her Out).

Two young couples out for a night of debauchery at the city’s oldest sex club find themselves stuck on a haunted antique bed where leaving means suffering a gruesome fate. Plagued with frightening hallucinations, they must figure out the bed’s secrets before they are picked off one by one. But when they call the police for help they are connected with a hard nosed detective who at that very moment is investigating the death of four young people at the same sex club in the same antique bed!

“I’m thrilled to be premiering my first feature film at such an amazing festival back in my home town,” says Director Maher.

Along with the world premiere announcement comes the haunting new trailer for BED OF THE DEAD.

About Breakthrough Entertainment Inc.,
Headquartered in Toronto, Breakthrough Entertainment Inc. (BEI) is a world-class studio, being a leading global producer and distributor of acclaimed primetime comedy and drama series, as well as factual entertainment, documentaries, television movies, feature films, family entertainment and children’s animation. As one of Canada’s largest television production and distribution companies, BEI has licensed programs to major broadcasters in over 200 territories. With a catalogue of over 3000 half-hours of programming, the company handles distribution as well as worldwide pre-sales, co-productions and third-party acquisitions. www.breakthroughentertainment.com

About Black Fawn Films
Black Fawn Films is an award-winning Canadian Independent Film Production house dedicated to bringing together amazing Canadian talent to create films people want to see. With 15 features (Bite, The Sublet, The Drownsman, Antisocial, Neverlost) and over 125 music videos (City and Colour, The Trews, Mötley Crüe, Theory of a Deadman) under their belt, Black Fawn has become a staple in the Canadian and international film and music video industry.  www.blackfawnfilms.com.