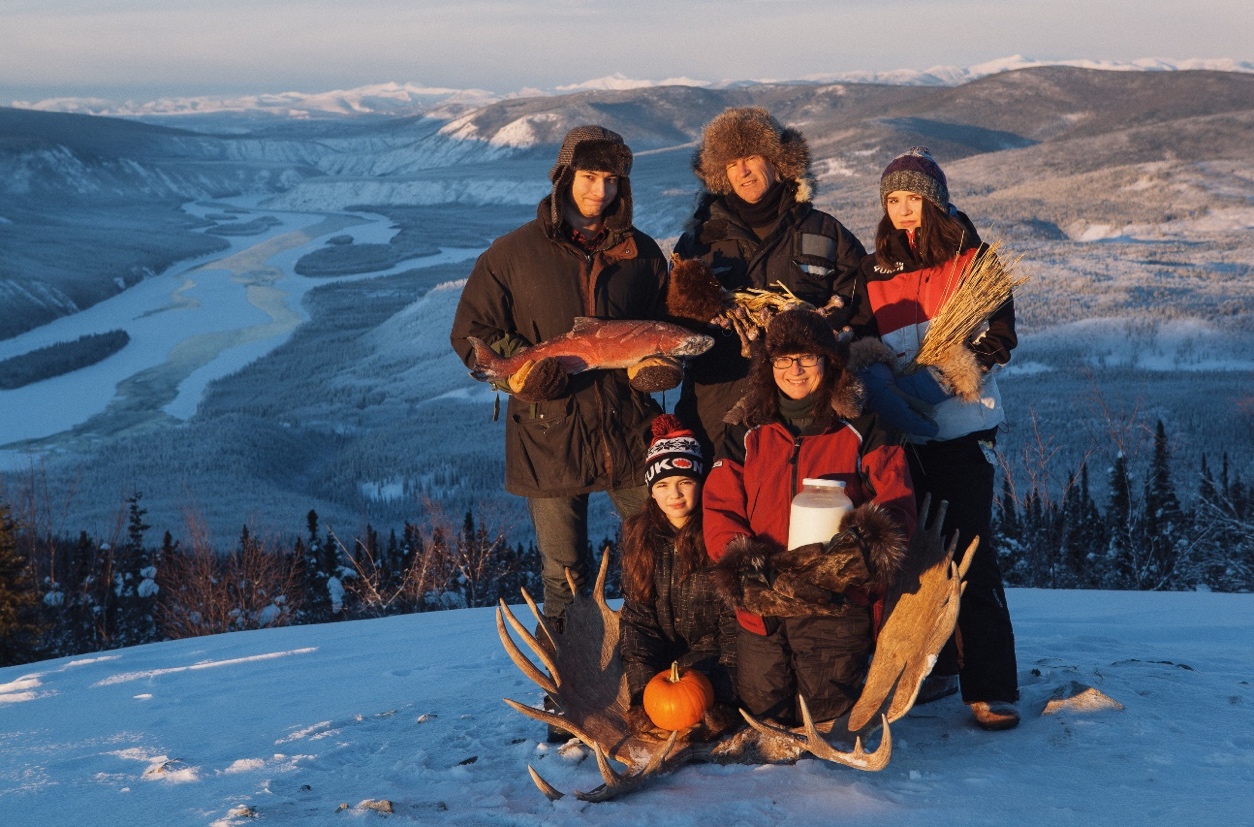 First We Eat
a film by Suzanne Crocker

First We Eat begins Screening and Streaming across Canada this week

No to salt, sugar, caffeine, sandwiches, or boxed cereals. Yes to moose nose, traditionally smoked Chinook salmon, berries, birch water, sugar beets and attempts to extract salt out of everything from mud to blood.

Most families with children would recoil at the one-year experiment chronicled in Suzanne Crocker’s First We Eat. And when she decided to act on plans to eat entirely locally from the lean offerings around Dawson City – 300 kms from the Arctic Circle – her husband Gerard, daughters Kate and Tess, and son Sam were indeed a hard sell.

But what they found was that it could be done. Despite family complaints, First We Eat is not ultimately a tale of hardship, but a reality check of self-sufficiency, in a place where 97% of food in stores is trucked in from thousands of kilometers away.

Inspired by a landslide that had cut off the main highway and left stores in the Yukon with virtually empty shelves within 48 hours, First We Eat is as much about who the Crockers meet as what they eat.

First and foremost, they are embraced by the most experienced hunters and foragers, Tr’ondëk Hwëch’in citizens and elders whose extensive knowledge of the rhythms of the Yukon’s modest bounty dates back thousands of years.

And then there are the local farmers, whose growing season is measured “in hours, not days” (albeit with days that are almost entirely sunlit), and whose every crop is an adventure in literally how far agriculture can be pushed. With some greenhouse help, the most Arctic-adjacent apple trees in North America are grown here (frost willing), and the northernmost dairy farm in the Western hemisphere is as well. An apiary plays a game of hive-roulette after a winter with minus-50 degree lows leaves some honey bees frozen to death and others thriving.

Though they spend a good deal of time day-dreaming aloud about cakes and sandwiches, the Crockers’ daily struggles and occasional waves of dinner-table disgust are an amiably humourous experience, full of teachable moments.

“They had to spend that year without any of the foods in the house that they wanted, eating weird and unusual food, and often having it rationed,” Suzanne says, lauding her initially-reluctant family’s accomplishment.

But the message of First We Eat is far from local. “Some of the challenges we faced are very much specific to the North, but the theme of food dependence is global,” she says. “A community that depends on its food coming from elsewhere is extremely vulnerable. And I like to say that the North is the canary in the coalmine of food security. “

“The good news is that, if you can produce food in the Yukon, there’s no excuse almost anywhere else.”

About Suzanne Crocker
Suzanne Crocker, received national and international acclaim for her first feature POV documentary All The Time In The World (2014) for its authentic, intimate and humorous style – which featured Suzanne and Family 10 years younger.  Winner of 22 Festival Awards from around the world including 9 Audience Choice Awards, 4 Best Picture Awards, 7 Environmental Awards, 6 Youth Awards, including Top 20 Audience Picks at Hot Docs and Most Popular Canadian Documentary at the Vancouver International Film Festival. All The Time In The World has screened in over 25 countries, on all continents, and been translated into 12 languages.  Suzanne turns her camera on herself and her family once again in her latest adventure, First We Eat.

Founded in 2014 in partnership between Robin Smith, president of KinoSmith, and Blue Ice Group co-owner Neil Tabatznik, Blue Ice Docs uses the expertise and skills of both organizations to acquire, fund and develop a wide variety of non-fiction projects from around the world. Current releases include: THE BOOKSELLERS, NOMAD: IN THE FOOTSTEPS OF BRUCE CHATWIN, THIS IS NOT A MOVIE, GREAT GREEN WALL. Upcoming releases include: THE CHANGIN’ TIMES OF IKE WHITE, THE REASON I JUMP, UNIVERSE, RONNIE’S, iHUMAN, FANNY and THE QUEST FOR TONEWOOD.”