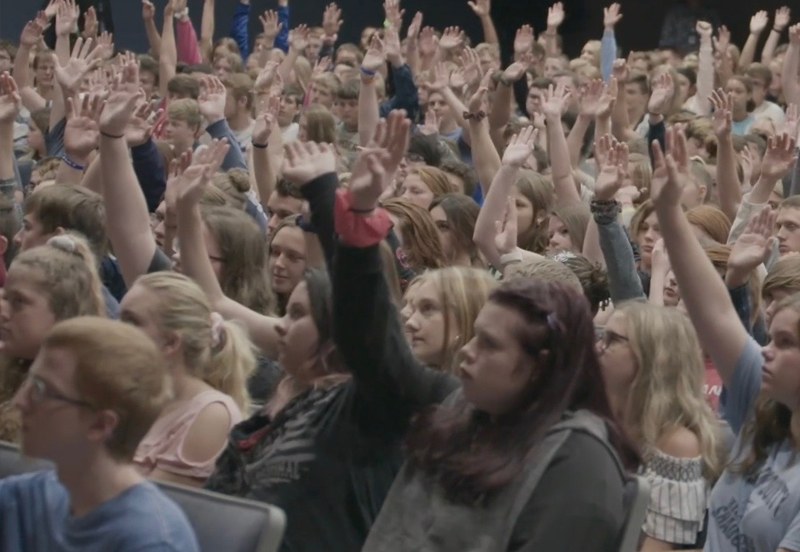 Connecting the Dots
A Film By Noemi Weis

This free online screening, presented by Filmblanc and Frayme, will be followed by a youth-led panel discussion hosted by Youth Advocate Jimmy Tan and featuring the film’s director Noemi Weis, subject Nathan Harmon of Your Life Speaks and film participants from around the world.

Oct. 7, 2020 – From acclaimed and award-winning filmmaker Noemi Weis comes CONNECTING THE DOTS, the first feature documentary of its kind where youth take on the subject of mental health, globally, in their own words. Audiences will have the chance to see the film for the first time during a Virtual Global Community Screening followed by a youth-led panel discussion on November 19, 2020 at 3:00pm – 5:00pm EST.

“Connecting the Dots comes to the world at a time when mental health universally has reached a boiling point,” said director Noemi Weis. “Under the present situation of COVID-19, atop of growing unrest surrounding systemic racism, sexual orientation and gender discrimination, just to mention a few, makes this film not only timely, but also urgent.”

In this raw and intimate film, youth talk openly about their experiences living with mental health. You will hear heart-felt poignant stories of lived experiences in a way you have never seen or heard before. And through all the darkness there lies hope that is truly inspiring.

The world is facing a population of young people feeling anxious, depressed and much too often and easily, ending their own lives. We are in a global crisis with youth mental health, and Connecting the Dots brings this crisis to the surface while shedding light on preventative and inspiring ways to bridge this epidemic amongst the young.

Nathan, one of the key subjects in the film, is the number one youth mental health speaker in the USA. He has spoken at more than 700 schools and is followed by millions of young people globally. He travels the world in order to search for answers and better understand and help the youth he is working with daily.

There are many other young people from around the world who open up and share their personal and poignant stories including Oke in Nigeria, Shellye in New York City, Lindsay in Edmonton and scores more from Australia, the U.K., Brazil, Argentina, Zimbabwe, and other nations as it unearths a confounding truth. Universal and diverse, first-hand very personal and raw visual diaries are revealed. We hear from young people from all continents who are clear, articulate and voice their opinion with a strong call to action.

Connecting the Dots opens fearless conversations about systemic racism, LGBTQ, lack of medical support and funding for mental health, the stigma and shame attached, and the urgent need for a paradigm shift in a system that is very much broken.

“When I read the alarming rates of youth mental illness related to anxiety, depression and the growing incidents of suicide among young people, my heart sank, and knew this was a subject I needed to explore,” said Weis. “There is an urgent global call to action asking to end the stigma and shame surrounding the struggles of youth mental health, and demanding an open dialogue for more accessible, relevant and timely support.

Noemi Weis is an award winning Writer, Director and Producer that has spent over 20-years telling stories on the big and small screens, from worldwide advertising projects to award-winning documentaries.

As a humanitarian and an advocate leader Noemí journeys where stories take her to bring voice to the world’s most vulnerable. Her films have been sold in more than 50 countries receiving numerous awards globally and making a difference in communities around the world.

Her last film MILK, received a passionate message of support from Mm. Sophie Trudeau and was honoured with an invitation to meet Pope Francis at the Vatican in recognition of the impact her films have created in global communities.

Additionally, Noemi has been recognized as one of the top 10 most influential Hispanic-Canadians, an award given by Toronto Mayor John Tory. Noemi is a proud member of the Unesco, Team Canada’s Trade Missions and a Business Ambassador of Ontario, promoting the merits of Canadian production abroad. In this capacity, she participates in trade missions and has been honoured with the nomination of “Woman Entrepreneur of the Year” for three years in a row, the last one by Export Development Canada, and nominated as a finalist for “Woman Entrepreneur of the World,” as the sole Canadian nominee.

Born in Buenos Aries and educated in Argentina and Canada, Noemi brings her skills and love for humanity to every project. She continues to create and develop films to promote human rights and social justice. She is fluent in English, French, Italian and Spanish with a good proficiency of Portuguese.

Produced in association with the TELUS Fund and Ontario Creates

In Association with TV5, The Boechk Foundation, The Echo Foundation , Private investors from Canada and USA plus Canadian Tax Credits.

Filmblanc is a film production company created by Noemi Weis in 1998 with a clear mission of bringing the world together. Before globalization was a common term and long before emails were the way of communication, Noemi Weis envisioned  an interconnected partnerships  between producers from around the world in order to nurture and provide creative people the means to produce their dreams anywhere in the world. With much success, Filmblanc created associations in 20 markets around the globe, bringing people together under one roof that at times encompasses travel to and from various different continents.

In the ensuing years, Filmblanc has effectively worked in virtually all forms of production from commercials and corporate to service productions of all forms, then adding as a natural progression, the production of social justice and human rights films in 2004. Since then, Filmblanc is proud to have  successfully brought forward the voices of the world’s most vulnerable and those in greatest need of an advocate by covering issues surrounding women and children’s rights, domestic violence, gay rights, education and health, both in Canada and around the world.

All of Filmblanc’s films have garnered and continue to generate international attention and awards, but more importantly, they have helped to make a lasting difference in the lives of individuals, communities, organizations and education.

As a multiple award winning, entrepreneurial and visionary company with a pristine track record of excellence, Filmblanc continues to create and develop films to promote human rights and social justice.

Frayme is a national and international organization that provides a common platform to advance knowledge, best practices, policy, and care for youth mental wellness across Canada and beyond. We help organizations access the evidence, networks, and tools needed to take action. Frayme was created to ensure that young people everywhere benefit from the latest knowledge in youth mental health and substance use. Because healthy young people means a healthy future and a healthy now. The addition of the “Y” represents youth at the centre of the work we do.

Frayme is funded by Health Canada, the Networks of Centres of Excellence program, and generous philanthropic donors. Frayme is hosted by The Royal’s Institute of Mental Health Research in Ottawa.