FIRE SONG, a film by Adam Garnet Jones Opens Theatrically in Toronto May 13 at Carlton Cinema 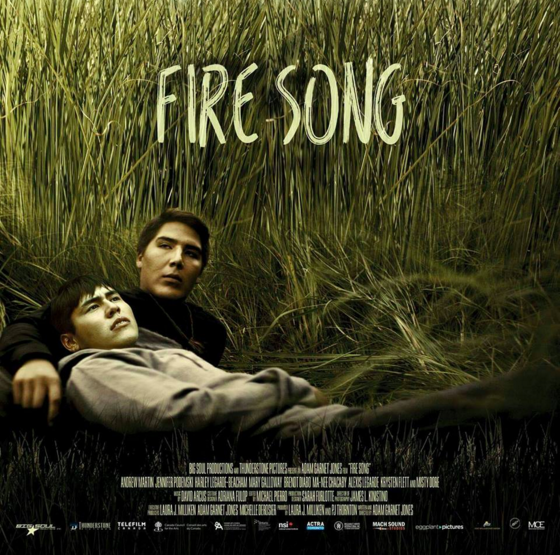 Fire Song is a universal story about youthful dreams confined by reality, set in a remote Aboriginal community. After debuting at the 2015 Toronto International Film Festival and a wildly successful festival run, the first feature from acclaimed director Adam Garnet Jones, and the first LGBTQ drama by an Indigenous, two-spirited filmmaker in Canada, Fire Song will open theatrically May 13 at Toronto’s Carlton Cinema.

The reserve at Wabigoon Lake Ojibway Nation, and Fort William First Nation in Northwestern Ontario provides a vivid backdrop to the daily turmoil of Shane (Andrew Martin), a gay Anishnaabe teenager struggling to support his family in the aftermath of his sister’s suicide. Determined to take care of his mother (Jennifer Podemski), he is torn between his responsibilities at home and the promise of calling to him from the city.

His desire to escape comes to a dramatic boil when his girlfriend (Mary Galloway) demands to be part of his dream life, oblivious to Shane’s secret relationship with David (Harley LeGarde-Beacham). Shane’s vision foresees himself at school in Toronto and David living with him.

Meanwhile, David wrestles with the incompatibility of his sexual orientation with his presumed destiny as the successor to his grandmother, a traditional healer and Elder in the community.

“As a result of all of the things that are happening in his life,” Jones says, “Shane is put into a situation where he has to choose. “The film is about Shane trying to have it all – trying to do the best he can in an impossible situation.”

In a still-developing career, Jones is known for his ear for the voices of troubled youth, particularly on the strength of his previous short-film Liar – a multi-character take on bullying. Both films share themes of passivity over action and, “the tension that I remember as a teenager.”

Director Adam Garnet Jones is a gay Cree/Metis filmmaker originally from Edmonton. His short films have been broadcast widely on television and at film festivals. In 2008, Adam received the imagineNATIVE/Canwest Mentorship Award and was the recent recipient of the RBC Emerging Artist Award and the Jim Burt Screenwriting prize for the script for Fire Song. He recently wrapped production on his second feature film, Great Great Great.

Big Soul Productions Inc. is an award winning and GEMINI nominated Toronto-based company founded in 1999. Owned by producer/entrepreneur Laura J. Milliken. Big Soul is dedicated to producing the highest quality productions bound for all screen sizes and audiences of all kinds.  Since its inception, the company has become a leader in Aboriginal content programming.  Big Soul currently has a development slate of two feature films and an original dramatic television series, and is in preproduction with its variety and performance series, The Guilt Free Zone.

MCE is a filmmaker-focused services approach to the various stages of feature film production: from creative development, financing, executive producer services, producer representation and domestic distribution.  Prior to MCE, Marina Cordoni worked for various entertainment companies including Breakthrough Entertainment, where she was responsible for building a dedicated movie division, and PolyGram Filmed Entertainment, where she handled pre-sales and completed picture sales in various foreign territories on major independent hits. http://www.marinacordoni.com/

At Thunderstone Pictures we craft award-winning drama and documentary films as well as commercial and educational products.  Thunderstone Pictures is recognized as a trailblazer for leading-edge filmmaking that pulls no punches on the social issues affecting our communities and our planet. In addition to multiple film awards, Thunderstone has won several community service awards including the Mayor of Thunder Bay’s Community Safety and Crime Prevention Award for our work with at-risk youth and for raising awareness on critical social issues like the prescription drug epidemic affecting remote Northern Ontario.