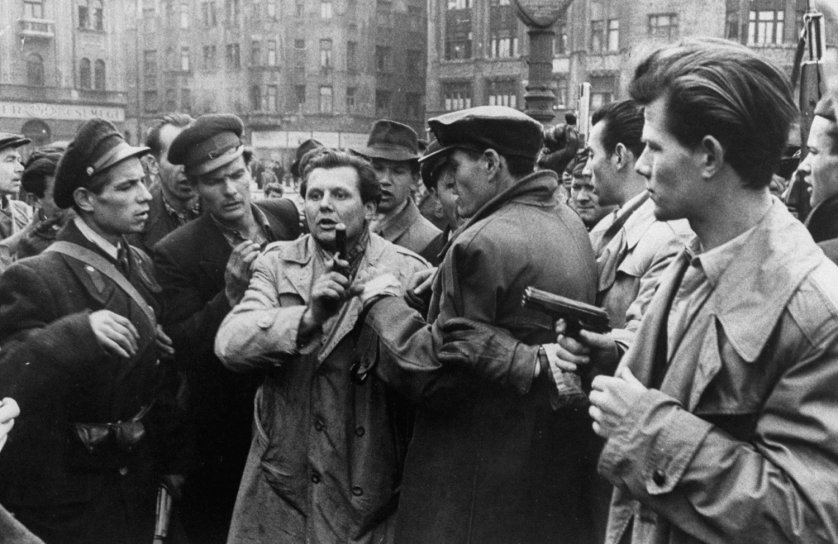 Featuring a number of special appearances
including internationally acclaimed pianist János Balázs,
and Award-Winning Producer Robert Lantos,
who will be presented with Hungary’s state honor.

As part of a cross-Canada program of cultural events marking Hungary’s 1956 revolution, the Hungarian Consulate presents the Freedom First – Hungary 1956 Film Festival featuring films about that historic Revolution. The uprising of October 1956 not only asserted Hungary’s national identity, but represented the first real resistance to the Soviet empire – the 1956 Revolution was the beginning of the end of communism.

The Freedom First – Hungary 1956 Film Festival – from Nov. 17-20 at TIFF Bell Lightbox – is a presentation of films about or themed around the revolution. The selected movies and documentaries show different aspects of how the Freedom Fight directly affected the lives of everyday people, how fear can be part of daily routine, how the desire for freedom can create heroes.

“On behalf of the Consulate General of Hungary in Toronto, we are pleased to be able to give thanks to Canada for accepting the Hungarian refugees after the brutal defeat of the 1956 revolution,” says Stefánia Szabó, Consul General of Hungary. “With our many events over the last few months to honor this anniversary, it is really a rare and special opportunity for us to show these very important, insightful, and emotional films. I hope that many of you will come and take in a film or two, or three, and be inspired by heroes – Freedom First!”

Canada took in 37,565 refugees from the Hungarian uprising, cementing a long-standing relationship between the two countries. Award-winning producer Robert Lantos was one of the refugees who left Hungary as an 8-year old boy, settling first in Uruguay then emigrating to Canada in 1963. He will be on hand at Freedom First – Hungary 1956 for a Q&A following the November 18 screening of his acclaimed film Sunshine (starring Ralph Fiennes and Rachel Weiss) about three generations of a Hungarian Jewish family whose experiences mirror the turmoil around them. Other credits for Mr. Lantos include Oscar and Golden Globe Nominated films, Barney’s Version, Eastern Promises, Being Julia, and The Sweet Hereafter.

On behalf of János Áder, the President of Hungary, Toronto’s Consul General Stefánia Szabó and the Hungarian Ambassador to Canada, H.E. Bálint Ódor will present Mr. Lantos with the Officers Cross of the Hungarian Order of Merit. This award is one of Hungary’s highest state honors.

Canada continues to be represented at Freedom First with a presentation of the CBC-produced The Fifty-Sixers, with Anna Porter in attendance for a Q+A following the screening on Saturday November 19. And Young Rebels, produced by Susan Papp, who will also be there for a Q+A following the screening, along with some of the Canadian-Hungarians, who appear in the documentary.

Another highlight during the festival is the screening of The Face of the Revolution – In Search of a Budapest Girl which will be followed by a live performance of János Balázs, one of Hungary’s most acclaimed pianists, who will also take part in a Q&A.

For a full listing of films to be screened from November 17 through 20, visit here.

Sponsored by the 1956 Hungarian Revolution and Freedom Fight 60th Anniversary Memorial Board.

About Freedom Fight and the Hungarian Revolution 1956
On the commemoration of the 60th anniversary of the Hungarian Revolution of October 23, 1956, the Freedom Fight was a defining event in both Hungarian and Canadian history. Canada and the Canadian people welcomed Hungarian refugees in an act of compassion, humanity and generosity. Canada welcomed 37, 565 Hungarians after the Uprising. These events built a strong link between Canada and Hungary, molding the image of Canadian society so much, that in 2010 it was designated a Canadian national historic event and part of Canadian heritage. The Revolution and Freedom Fight lasted for no more than two weeks; in October 1956 the Hungarian nation proved that it was capable of taking control of its own destiny. It wrecked the regime established by the great powers after World War II and unveiled the cruel reality of the Soviet terror that had taken over. Once and for all, the world woke up from the illusions of communism. The desperation and anger that had been bottled up for so many years finally broke through the surface during the revolution. The spontaneous uprising grew to become a revolution, and since the prerequisite of freedom is to regain national independence, this became their target. The whole world turned its attention to Budapest during that time, and this life-and-death struggle in the two week span made it clear that the then existing great powers gave no chance for the freedom fight of the Hungarians to succeed. Even so, the death defying courage of The Boys of Pest inflicted an incurable wound upon communism and shook the Soviet empire.

About Hungarian Consulate
The Toronto Consulate General of Hungary serves as a key component for both the Canadian-Hungarian Diaspora and for Hungary’s foreign affairs liaisons. The Consulate began its work in Toronto in August 2013, and continues to service their consular clients, as well as deepening bilateral relations between Hungary and Canada.  The maintenance and promotion of national interests of Hungarians in Toronto is both a responsibility and an opportunity to achieve great things. Their goal is to create collaboration with Hungarian organizations in order to advance commerce, cultural and consular matters, politics, tourism and everyday relations.  The organization continues be at your service and welcome all observations and comments regarding their work.