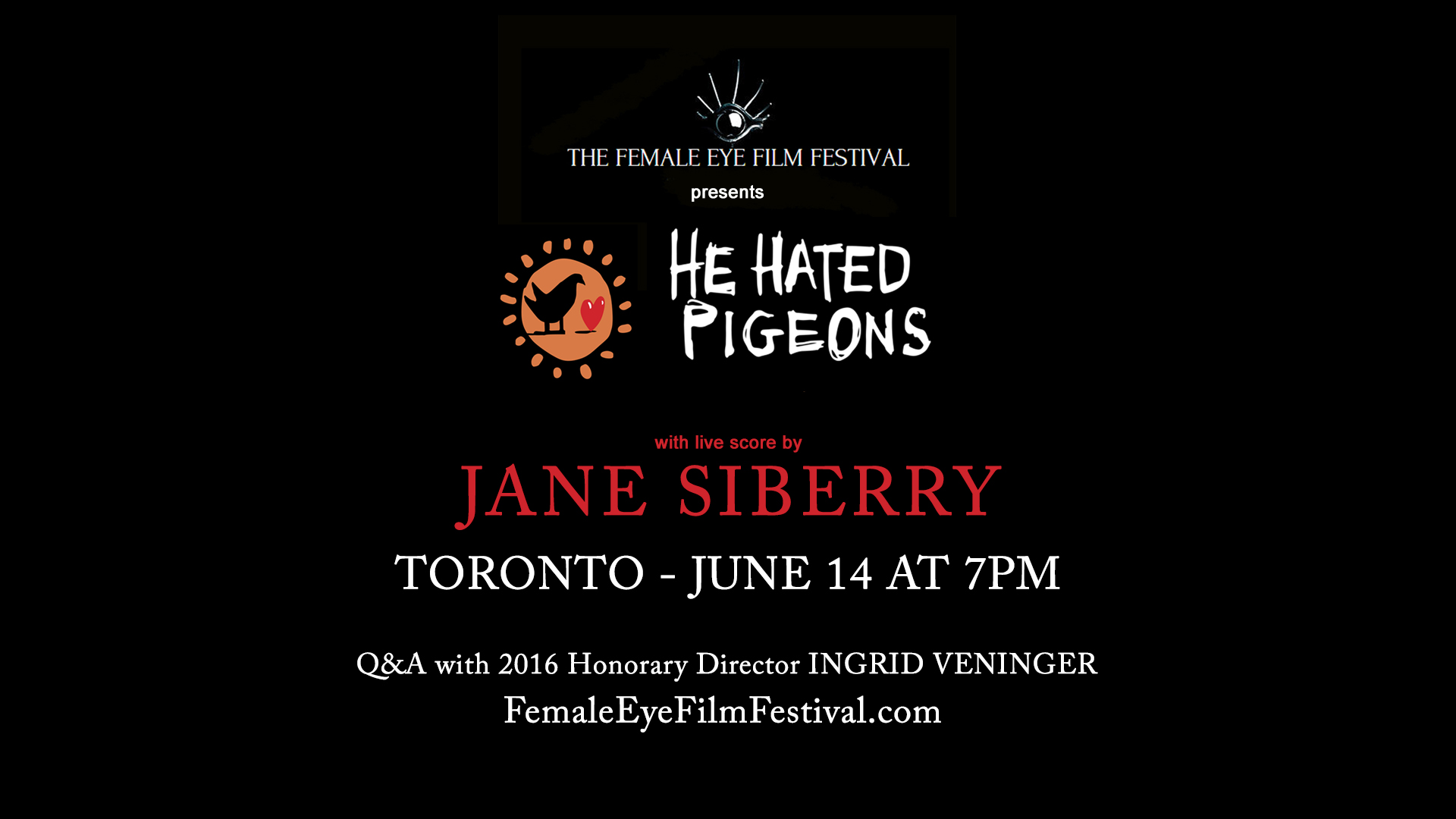 He Hated Pigeons
a film by Ingrid Veninger

Ingrid Veninger, “Canada’s DIY queen of indie filmmaking” is back with her 5th feature HE HATED PIGEONS and once again she has created another deliberately intimate film, this time a remarkably well-measured tale of love and loss.

“Simplicity is what yields complexity. Nowhere in recent memory is this more apparent than in the dazzling and heartbreaking HE HATED PIGEONS.” Greg Klymkiw, The Film Corner

Her film will open the 14th annual Female Eye Film Festival on June 14. This special screening will feature a live score performance by the incomparable Jane Siberry.

All musicians performing with HE HATED PIGEONS receive only one request from Veninger, “no music in the first six minutes.” After the opening, musicians have total freedom and Veninger hears the music for the first time with the audience. “It’s an exercise in trust and surrender because the music completely influences the experience for the audience and it is a challenge for me to give up so much control.”

We are never sure just how Veninger does it, but it’s clear that this fiction, just like her others, reveals a gifted filmmaker with undying respect for her actors. Gorgeously shot from the Atacama desert to Patagonia’s ice fields by cinematographer Dylan Macleod, and starring newcomer Pedro Fontaine. HE HATED PIGEONS is utterly devoted to exploring a young man’s confrontation with grief, trekking through the varied landscape of Chile to satisfy a mission and achieve resolution.

“This film is a remarkable experience not soon forgotten.”  Jason Gorber, Twitch Film

From the very start, Veninger conceived HE HATED PIGEONS to be presented with an ever-changing, improvised live score. “This project has been the most intense,” says Veninger, “not because I booked the crew’s flights to Chile before there was a script, or because I wrote the lead role for an actor whose work I had never seen, but because every step of the process had to allow for the added uncertainty of a live-score. The idea of different musicians, in each city, improvising their own music was a commitment that influenced and informed every choice in making this film — from writing and shooting, through editing and sound design. There was no way the live-score could be a gimmick, it needed to be intrinsically woven into the fabric of the film so that it became essential. HE HATED PIGEONS deals with letting go. And, I want the audience to feel something which has its own intrinsic impermanence. So the music is never recorded and never repeated. What happens here in Toronto at FEFF will not be seen online. To experience it, you must show up.”

Ingrid is being celebrated at a special Tribute as HONOURARY DIRECTOR on Saturday June 18 at 10am, by the Female Eye Film Festival. This event is open to the public, and is FREE.  All are welcome!

INGRID VENINGER – Writer/Producer/Director
Born in Bratislava and raised in Canada, Ingrid formed pUNK Films in 2003 with a ‘nothing is impossible’ manifesto. Awarded the 2011 Jay Scott Prize presented by the Toronto Film Critics Association, Ingrid Executive Produced five features with the cash award ($5000) and launched the 1KWave in Toronto. Since 2008, Ingrid has written/produced/directed 4 features (ONLY, MODRA, i am a good person/i am a bad person, THE ANIMAL PROJECT) all of which have premiered at the Toronto Int’l Film Festival and have garnered awards and distribution worldwide. In 2014, she initiated the pUNK Films FEMMES LAB to foster feature films written and directed by Canadian women, sponsored by Academy Award winner Melissa Leo. Currently, Ingrid is a member of the Film Studies Faculty at York University; she is touring film festivals with her latest feature, HE HATED PIGEONS.