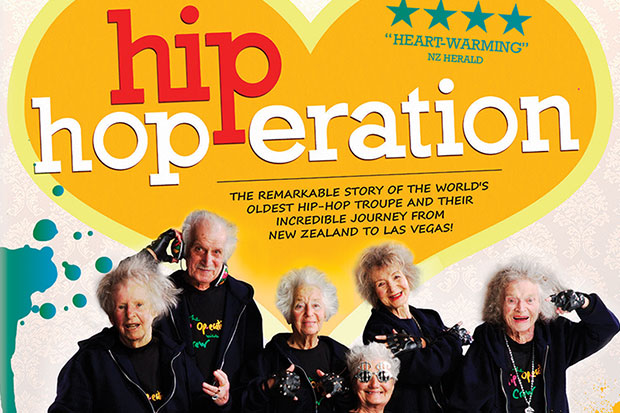 Who said your grandmother couldn’t be a hip hop star?

“packed with moments to smile at” – Mark Adams, Screen Daily

Twenty-seven nonagenarians make their way into the hearts of thousands and to the prestigious World Hip Hop Dance Championship in HIP HOP-ERATION, Bryn Evans’ life-affirming documentary, opening March 11 in Toronto at The Bloor Hot Docs Cinema.

In this character-driven documentary we meet Kara (94) Maynie (95) and Terri (93) – each almost a century young – who along with twenty-four other New Zealand nonagenarians, travel to Las Vegas to take part in the World Hip Hop Dance Championship.

Led by their exuberant and ‘I must have been mad’, manager Billie Jordan, this group of young-at-heart dancers defy all odds and captivate the hearts and minds of thousands of young fans from around the world.

“This is a story that not only explores the truly universal themes of individuals needing to find a purpose and relevance to their lives – but life and death itself,” said director Bryn Evans. “Like the theme music says… ‘Life is for Living.”

HIP HOP-ERATION is director Bryn Edwards second feature. For over 15 years, his passion to expose injustice has formed the foundations of his work as both a photographer and now a filmmaker.

About Blue Ice Docs
Founded in 2014 in partnership between Robin Smith, president of KinoSmith, and Blue Ice Group co-owners, Steven Silver and Neil Tabatznik, Blue Ice Docs uses the expertise and skills of both organizations to acquire, fund and develop a wide variety of non-fiction projects from around the world. Recent releases include Requiem For The American Dream, The Look Of Silence, Deep Web, and The Last Gigolos. Upcoming titles: The Forecaster, Tomorrow We Disappear, Speed Sisters, and Censored Voices.