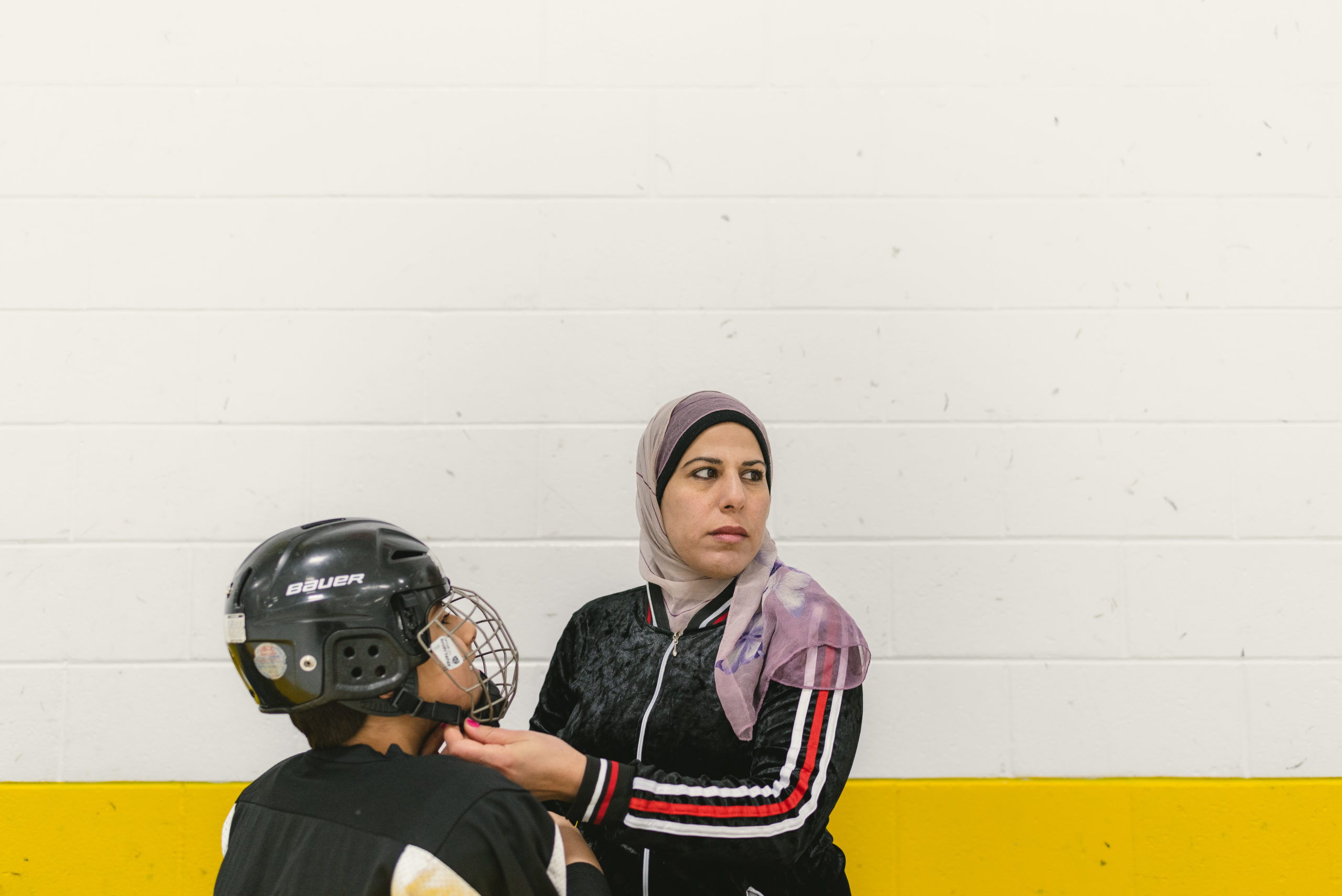 Hockey Mom
A film by Teyama Alkamli and Andrew Moir

Hockey Mom is an intimate, character-driven film that follows a single Syrian mother and her young son rebuilding their life in Toronto with the support of Canada’s private refugee sponsorship program.

When the Syrian war tore her life apart, Fatma bravely seized the opportunity to build a new life for herself on her own terms. Twenty days after she arrived in Toronto from a refugee camp, Fatma fulfilled a years-long wish: she left her husband.

For the past two years, Fatma and her son, Majed, have been living with their sponsors on Vermont Avenue, a friendly street in Toronto.  On the surface, their new life in Canada seems fine, but Majed hasn’t made friends and is routinely suspended from school for unruly behaviour. She decides that a change of address might be the solution to his problems. Determined to provide Majed with everything he needs, Fatma finds an apartment in a nearby suburb.  But the move makes matters worse and Fatma encounters obstacles every step of the way.

Majed’s school suspensions continue, leaving Fatma with no time to look for a job. When the sponsors tell her that their financial support will soon run out, and with no job prospects in sight, she feels like a failure. Nowhere left to turn, Fatma digs deep to take ownership of her choices and finds the courage to face them.

Teyama Alkamli
Born in Aleppo and raised in Dubai, Teyama Alkamli is currently a proud Torontonian. Her visually tender and deeply human films deal predominantly with issues of identity, sexuality, displacement and migration. Alkamli’s short films have screened at festivals worldwide, including Doclisboa and FECIBogotá. She is an alumna of DocNomads, the European Mobile Film School, Hot Docs Emerging Filmmaker Lab, and the Canadian Film Centre’s Director Lab. Hockey Mom is her first mid-length documentary. She is currently developing her narrative feature debut, My Name is Jala.

Andrew Moir
Marked by their intimacy and powerful moments, Andrew Moir’s documentaries leave you thinking long after watching them. The intricate maneuvers he manages while integrating himself into each subject’s life, often spanning years, is remarkable. Working with small crews or often alone, audiences have been truly touched by Andrew’s films. He has seen great success at film festivals where four of his short films premiered at Hot Docs Canadian Documentary Film Festival. Other festivals who have featured his films include Sheffield Doc/Fest, AFI Fest, and DOC NYC. His production company, Hands Up Films, produces his docs and he is currently working on his first feature-length film, Bedside Bride, which will be released in 2020.