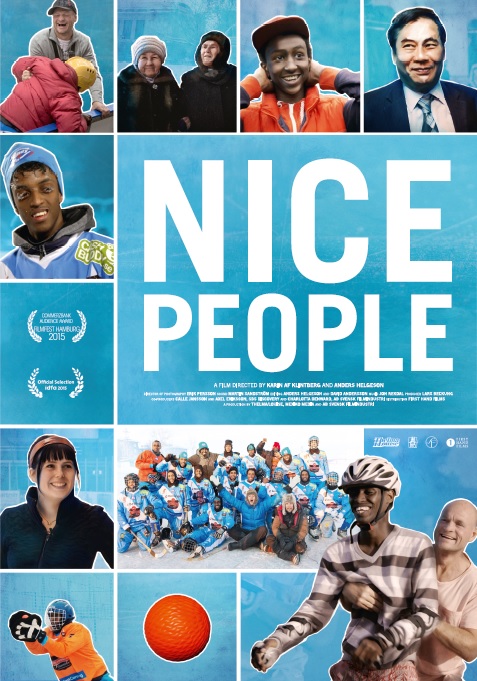 A timely story of integration, determination and Bandy ice hockey

A film by Karin af Klintberg and Anders Helgeson

How can you help 3000 Somali immigrants integrate into a small town in Sweden? Journalist Patrik Andersson had an idea: ask guys who have never known temperatures below 20 degrees to become Somalia’s first-ever national Bandy ice hockey team, and let the beloved sport bring people together.

Writers/Directors Karin af Klintberg and Anders Helgeson follow their extraordinary journey in NICE PEOPLE, which is set begin its Canadian theatrical run in Toronto on February 5, 2016 at The Bloor Hot Docs Cinema, from KinoSmith.

The film follows a group of young men who fled the war in Somalia and have ended up in a rural town in Sweden where integration is tough. Andersson, a local journalist and entrepreneur, decides to use Bandy as a bridge to get people closer to each other. Their goal is to create Somalia’s first-ever national team in Bandy and make it to the World Championship in Siberia, which is only six months away.

Winner of the Commerzbank Audience Award at FilmFest Hamburg 2015, NICE PEOPLE is a story about bravery and about daring to try to change the world in ways that haven’t been tried before.

KinoSmith Inc., is an independent Canadian film distribution and marketing company founded in 2007 by distribution veteran Robin Smith. KinoSmith is also home to the Hot Docs Collection that releases award-winning documentaries curated by the Hot Docs Festival in Canada. KinoSmith recently teamed up with the Blue Ice Group to start a new global distribution entity call Blue Ice Docs. KinoSmith’s recent releases include IRIS, HOW TO CHANGE THE WORLD, and BIKES VS CARS. Coming up in 2016 are THEORY OF OBSCURITY: A FILM ABOUT THE RESIDENTS, THE SHOW OF SHOWS and GAYBY BABY.