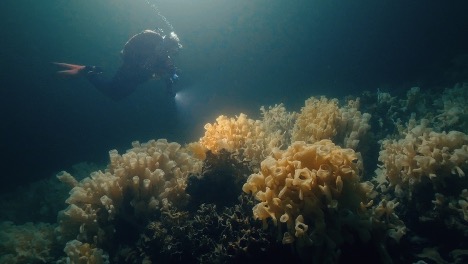 In British Columbia and Alberta – on CBC’s Absolutely Canadian

And streams nationally on CBC GEM

Interviews are available with Nate Slaco and Bryce Zimmerman

More people have been to the Moon than to places the Glass Sponge Research Team has been.

This rag-tag group of “citizen scientists” with day jobs and scuba gear, came together after the discovery of “living dinosaurs” off the coast of B.C.

At depths of 200-plus feet – challenging the capabilities of breathing regulators – Howe Sound is home to prehistoric glass sponge reefs thought to be extinct for more than 40 million years.

Much of what science now knows about these almost alien lifeforms has come courtesy of this group of civilians who’ve put their money and lives on the line for discovery, and to help protect this endangered environment.

Filmmakers Nate Slaco and Bryce Zimmerman spent months with Hamish Tweed and his diving cohorts, filming Moonless Oasis, a chronicle of the efforts of a team so dedicated that they train at night to replicate the darkness of the deep. They are directed to their discoveries by Glen Dennison, the linchpin of location discovery and mapping, who has been honoured for his work by the Crystal Ocean Awards.

Shot in verite style, Moonless Oasis lets the team’s passion and commitment speak for itself, amid submerged surroundings of almost indescribable beauty. Almost immediately, we see the risk the divers willingly embrace, when one experiences breathing difficulties at 220 feet.

To them, however, the prize of discovery is worth the risk. Their efforts at identifying reefs are based on the notion that you can’t protect what you don’t know is there. And, as is often the case, human activity is what most endangers this prehistoric tableau.

Specifically, improper prawn fishing takes its toll on the ocean bottom. The filmmakers interview some responsible local prawn fishermen who use the latest high-tech equipment to cull almost surgically. They claim to have never once accidentally caught a sponge, and confirm the same can’t be said for some colleagues.

And the stakes are high. Scientists have been shocked at the extent to which glass sponges (so named because of the silica content in their bodies) filter and clean their surroundings of bacteria and carbon dioxide. (It’s estimated that eight deep sites they’ve identified filter 17 billion liters of sea water a day).

On its Facebook site, the team expresses its hope, “that through educating people of their existence, we may protect these animals.” In fact, there are only 17 of theses reefs that can be reached by divers in the world. Only eight are designated so far as protected.

“Seeing what the glass sponge team was able to do for protection with these reefs just goes to show there’s so much more that can be done in your own backyard than people realize,” says director Nate Slaco. “What we witnessed during the deep dives to these sites showcases their passion for these ecosystems and the risks they’re willing to take in the name of conservation.

“When I first saw images of the sponge reefs of Howe Sound I was surprised that this hidden world existed hundreds of feet below the water,” continues Slaco. “ I knew I wanted to make a film about glass sponge when I saw how far this team is willing to go to protect them.”

“Making a documentary that takes place partly at the bottom of the ocean, on a small budget, is exactly as easy as it sounds,” says Cinematographer Bryce Zimmerman. “We planned to film 3 dives and only got usable footage on the 6th and 7th.

“Shooting most of the film on boats was a big visual challenge to tackle,” continues Zimmerman, “and ultimately we decided that since the boat is moving, the camera shouldn’t be. We didn’t want to make the audience sea sick.”

Moonless Oasis was produced in association with The Canadian Broadcasting Corporation, and with the participation of Rogers Documentary Fund.