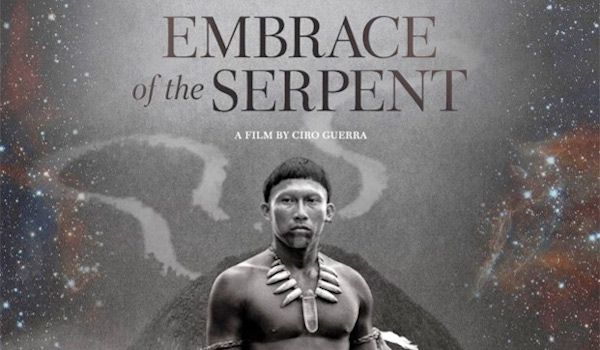 In Spanish/Amazonian languages with English Subtitles

Other Canadian cities to follow.    Available on VOD/iTunes, March 15

“A visually mesmerizing exploration of man, nature and the destructive powers of colonialism.”
–The Hollywood Reporter

“A hell of a trip.”
– Screen International

After a stellar festival run where it screened at Cannes and TIFF to universal acclaim, Colombia’s first-ever Oscar® nominated film, Embrace of the Serpent, will start its Canadian theatrical run in Toronto, Ottawa, Waterloo and Halifax on February 19, followed by Vancouver on March 2 and Montreal on March 11, through Northern Banner Releasing.

At once blistering and poetic, the ravages of colonialism cast a dark shadow over the South American landscape in director Ciro Guerra’s (The Wind Journeys) third feature. Filmed in stunning black-and-white, Serpent centers on Karamakate, an Amazonian shaman and the last survivor of his people, and the two scientists who, over the course of 40 years, build a friendship with him. The film was inspired by the real-life journals of two explorers (Theodor Koch-Grünberg and Richard Evans Schultes) who traveled through the Colombian Amazon during the last century in search of the sacred and difficult-to-find psychedelic Yakruna plant.

Embrace of the Serpent will be available on Canadian iTunes, Vimeo and VOD platforms starting March 15.