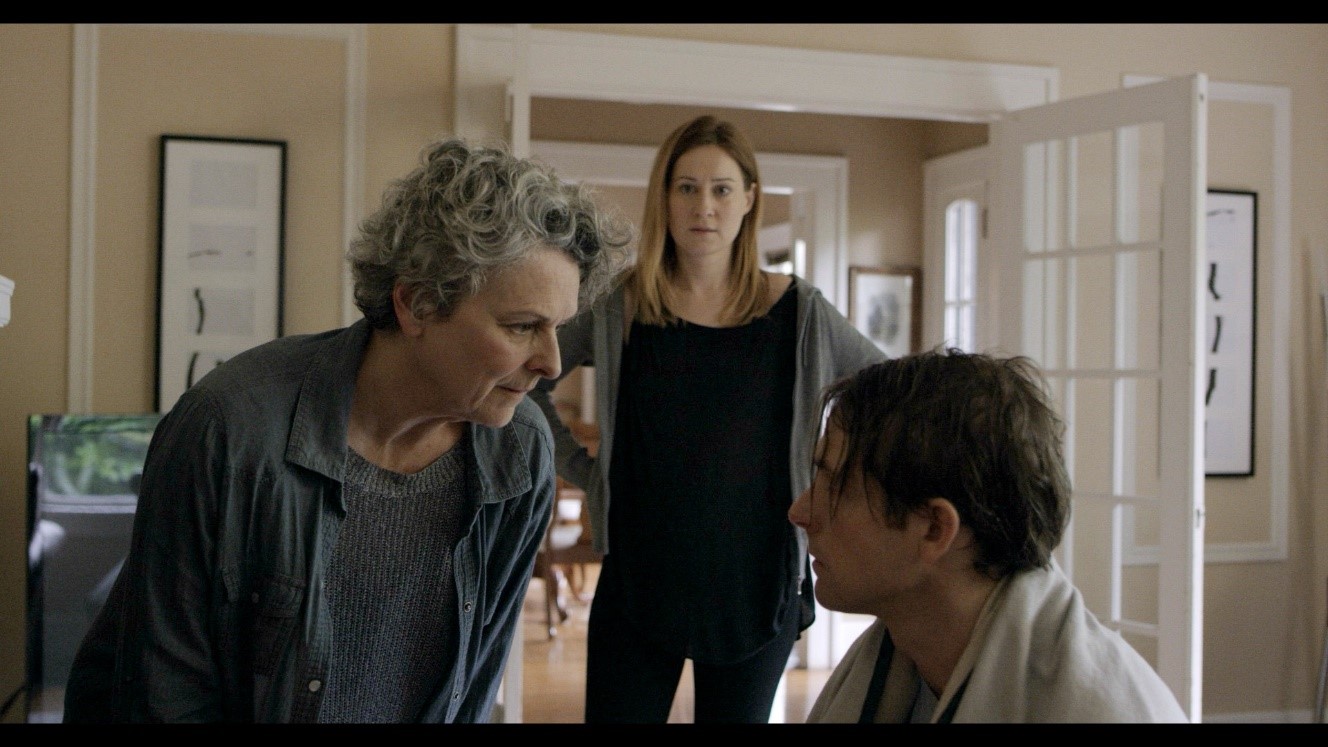 “Vancouver director Bruce Sweeney’s film is, for what it’s worth, the best Canadian comedy of the year…”
Jim Slotek, Original-Cin

Award-winning Canadian director Bruce Sweeney returns with Kingsway, his 8th feature that is a hilarious portrait of a family minding everybody’s business. It had its world premiere at TIFF 2018.

Matt (Jeff Gladstone) drives by a motel and spots a motorcycle belonging to his wife Lori (singer-songwriter Colleen Rennison). Later, at a birthday dinner for his mom Marion (Gabrielle Rose), Lori explains she was visiting a friend who was in town to attend to her dying mother.

The anxiety-prone Matt happily buys the story. Marion and her no-nonsense car-mechanic daughter Jess (Camille Sullivan) do not. And they’ll be the judge of the truth and what’s to be done about it.

Before this war of mixed signals is over, there’ll be a suicide attempt, a pregnancy of uncertain paternity, multiple sexual awakenings, and some kick-ass blues rock tunes.

But as Matt becomes an apathetic, depressed layabout, it falls to Marion and Jess to stir the drink in a series of events that naturally begins in a bar (where Marion proves better at getting action than her frustrated daughter).

Love is the driving force behind all this interference. And it takes a patient mental health professional (Jennifer McLean) to act as referee and sort out the emotional wreckage.

Kingsway is written and directed by Sweeney (The Last Wedding, Crimes of Mike Recket, The Dick Knost Show) and is named for the street on which the motel is located.  It is a hilarious over-the-top serio-comedy about an on-the-rocks marriage in which everyone feels they have a stake – including sisters, in-laws and best friends (Matt’s guitar-playing friend Sean, played by Paul Skrudland, is a key person-of-interest in a flurry of accusations).

Can this marriage survive the “help” of a swarm of busybodies?

“I wanted to make a film about love and suicide. Yet make it accessible, not some heavy thing,” says Sweeney. “I chose the romantic comedy/romantic drama genre for this reason. For me, theme’s a big deal, and the theme of Kingsway is about the nature and fragility of familial and intimate relationships. I wanted every scene to refer to this in some way.

“The actors and I workshopped the script and their input and ideas added a layer of authenticity that i couldn’t have achieved by myself.”

Sweeney made his debut in 1995 with Live Bait and won TIFF’s award for Best Canadian Feature. In 2002 his entry, Last Wedding was a festival opening night gala. His personal and witty films have been recognized at the Canadian Comedy Awards (where Last Wedding won a best director prize), the B.C.-based Leo Awards (where 2009’s Excited won Best Feature Length Drama) and the Vancouver International Film Festival, which gave a Best B.C. Film award to 2013’s The Dick Knost Show.