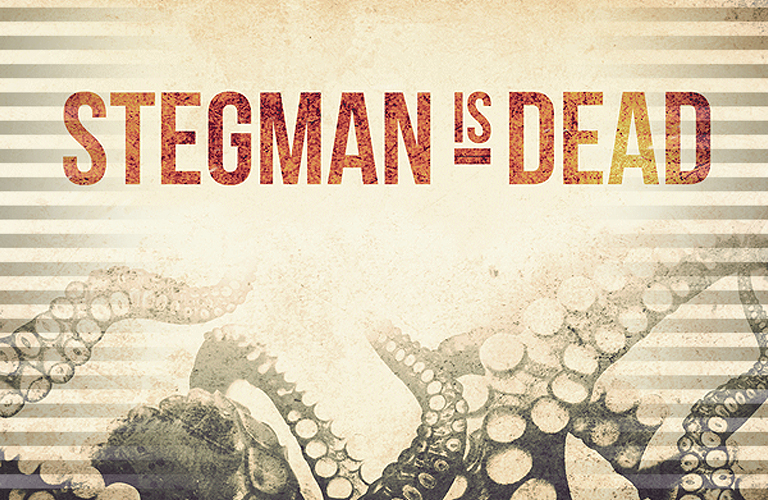 Stegman Is Dead
A film by David Hyde

A dead pornographer, an incriminating VHS tape, and an array of bizarre hitmen make this a surprise dark crime comedy.

Trailer
Middle America, home of the American Dream.  Aspiring filmmaker, Stegman, blackmails a now defunct gang of thieves to get the cash to make his films.  He has VHS surveillance footage of a 10-year-old crime, and he wants a pay out from the crew who did it.   Leader of the crew, Don (Michael Ironside), sends in his associates to get back the incriminating evidence.

Should be easy right?  Crooks vs. Filmmaker – no contest.  Well, not so fast.  Stegman, who wants to make art films but has turned to producing tentacle pornography and is already dead when they get there.  Who killed him and where are the tapes?  One by one, as the associates enter Stegman’s house to seek out the evidence, they go incommunicado.

Oh, and there’s a giant octopus. In the living room. Its just business.

Enter Gus (Michael Eklund). When he gets the call from Don, he’s with his wife and daughter on the way to his mother-in-law’s birthday party.  His wife Diane (Andrea del Campo) is really not impressed.  She hates Don.  It’s not because Gus is involved in crime that she’s mad.  It’s because he’s not involved in big enough crimes that she’s pissed.  She’s behind her man and she wants him to graduate from small-fry crimes with Don and the crew and start bringing home the big bacon to her and their precocious six year old daughter Angela (Linnea Moffat).

Diane: “If you brought home the bacon, maybe you’d get your sausage eaten.”

This is the set-up for Stegman Is Dead, directed and co-written by first-time feature director David Hyde (award winning short film, music video director and veteran reality/documentary- reenactment TV director).  A wry and satirical comedy with Tarantino-esque dialogue, it attracted attention well before its release, with two nominations at the Golden Trailer Awards in LA, an Award Of Excellence at the IndieFest 2017 Film Awards in the US and a “market premiere” at the Cannes Film Festival programmed by Telefilm Canada as one of their six favorite films of 2017.

Director Hyde focused the film on a single location (Stegman’s home/studio) and created a colorful array of criminals, each with their own distinct “style.” There are twenty-one speaking roles include a bumbler named Lars (Arne MacPherson), a sadistic Russian named Sergei (David Lawrence Brown), a psycho “terminator” named Kruger (Stephen Eric McIntyre) and a mystery-woman named Evy (Bernice Liu).

And then there’s Diane’s family, a deceptively pleasant, aging lot of retired criminals who want to give her struggling husband Gus, a leg up.  You know, nepotism.

“This is really a family morality tale, disguised as a hitman movie,” says Hyde. “The father and daughter – the leads of the story – are members of a clan that goes back generations. They revere the fact that they are thieves. They live in an offbeat culture that exists outside normal society. ‘My dad taught me how to steal wallets, I’m teaching my daughter how to steal wallets.’ Its generational knowledge passed down, like shoe cobblers.”

From the producers of the cult-hit TURBO KID comes RADIUS, opens across Canada, Dec 1