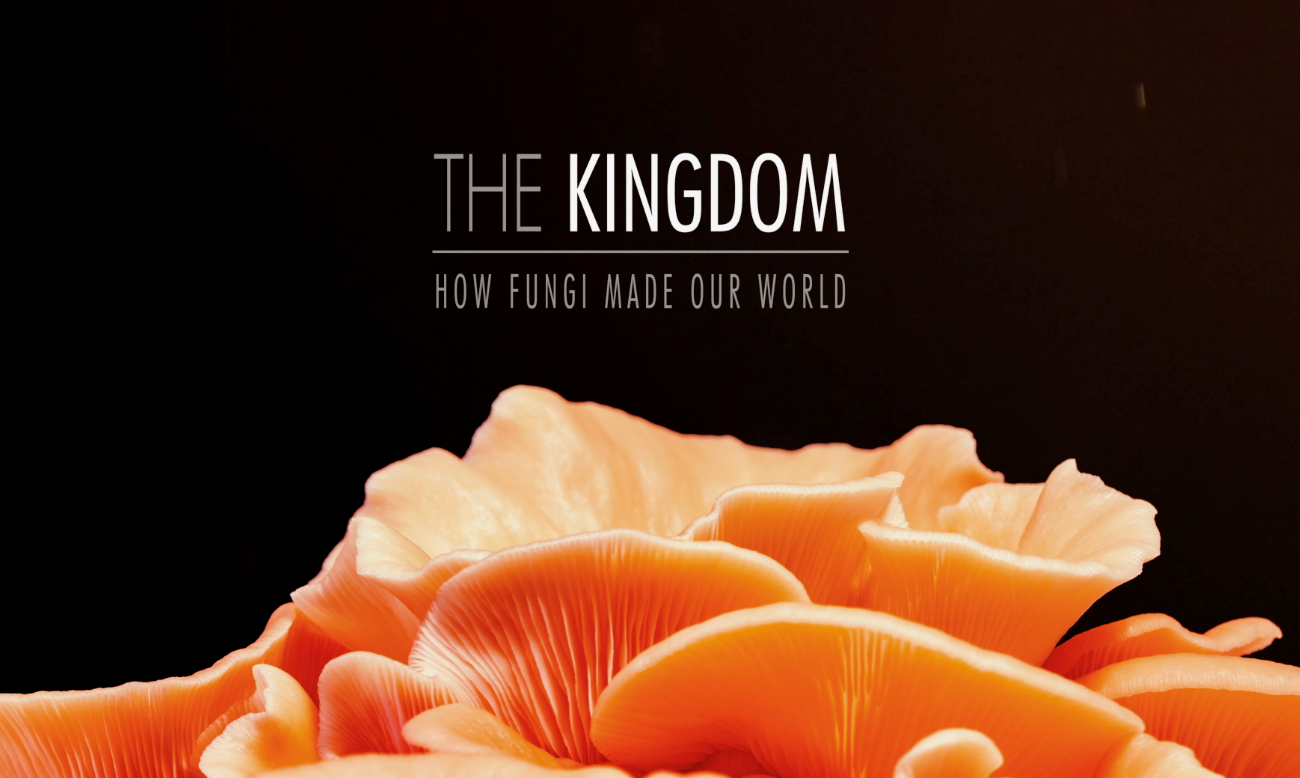 Since the dawn of life, fungi have been the driver of evolution on land.  This makes them both powerful allies and, given the chance, formidable foes.

The Kingdom: How Fungi Made Our World
a stunning and fascinating feature doc by Annamaria Talas

The documentary will also be available to watch online at
cbc.ca/natureofthings, Friday, April 6 from 5:00 pm EST.

Neither plants nor animals, fungi are a kingdom in their own right.  When we think of fungi we usually think of tasty mushrooms, but these are just the ‘fruit’ – like the apple on a tree –  and a small part of the fungal life that is all around us. The vast Kingdom is mostly found underground.

In The Kingdom: How Fungi Made Our World, acclaimed science documentary director Annamaria Talas, takes us into an alien world where the tendrils of the most persistent and ancient lifeform on our planet connect whole forests via “the Wood Wide Web,” an information highway that allows trees to communicate and even send out danger signals to each other.

“The pace of change in science can be bewildering,” notes director Talas. “Everyday seems to bring a new story that overturns accepted knowledge, from the origins of the universe to the origins of humanity and everything in between. Sometimes it’s difficult to see the big picture, to see how our ever-growing data actually brings about greater understanding of the natural world and how we relate to it.”

An expansive documentary which leads us on a fascinating journey from a billion years into the past and forward to an uncertain future, The Kingdom consults many of the world’s leading experts on fungi, and tells the remarkable story of evolution driven by a spore-based lifeform that literally ate rocks to kickstart Earth’s ecology.

We discover how land-bound fungi and marine algae “traded” nutrients to begin the process that saw plant-life evolve and the eventual greening of the planet. We learn about an era of eight-meter high tree-like fungi called prototaxites that ruled the Earth for 50 million years. And we see the evidence of fungi’s role in reigniting evolution after the mass extinction event that ended the Age of Dinosaurs. We also learn how fungi play a role in our very own lives and in every breath we take.

In what amounts to an extension of her previous 2014 doc Life On Us, Talas reveals our relationship with fungi within the eco-system of our own bodies and the environment we live in and how our high internal body temperature (37 degree C) wards off many potentially lethal fungal pathogens. It’s a defence mechanism that may be at risk as a rise in global temperatures produces more heat-resistant fungi, as a breakout of a potentially fatal air-borne fungal lung disease in B.C. clearly warns us.

And yet fungi have also helped us. As a result of eons-long chemical warfare between fungi and bacteria, fungi have found ways to win. Alexander Fleming, in 1928, isolated penicillin from the fungus Penicillium.  Ever since, Penicillin has been a lifesaver for millions of people.  In fact ten of the top 20 modern day antibiotics are derived from various fungi. In The Kingdom viewers will learn more about a recent ground-breaking Canadian scientific breakthrough that is restoring the power of our antibiotics making them once again lethal weapons in the never ending fight against superbugs.

Fungi also provide valuable medicines like immune-suppressants and cholesterol-lowering statins.  Scientists are now investigating the benefits of a wide range of mushrooms for their anti-inflammatory, anti-cancer, anti-oxidant, and immune stimulant properties.

For some fungi like yeasts, the choice of weapon is fermentation. These yeasts ferment food, turning sugars into alcohol, which poisons most microbes including bacteria. Long before humans invented pasteurization and refrigeration, a drink free of disease-causing bacteria and rich in nutrients was extremely valuable. So, for our forebears drinking beer was safer than drinking contaminated water.

“Some fungi will save us, others will threaten us. And we are just beginning to understand which is which,” says biologist Rob Dunn from North Carolina State University, who provides The Kingdom’s most compelling insights.

“It’s been a three-year long journey from the idea to the finished film,” says Talas, “made possible by our close collaboration with an international team of producers in Australia and Canada. It’s never easy to make such ambitious films, but we hope audiences will find the finished film worth the time they will spend discovering more about this remarkable Kingdom. As we say in the film, fungi represent both a dire threat and a tremendous opportunity to humanity. So it’s well and truly time to get to know them.”

About Real To Reel Productions (R2R)

Founded in 2011, Smith&Nasht is a creative partnership between Australian entrepreneur and philanthropist Dick Smith and documentary filmmaker Simon Nasht. We tell stories about important ideas for audiences curious about how the world works and where it is heading. The topics we explore are broad, ranging from science and history to politics and global affairs – yet all our films share a common DNA: a call to pay attention!  Our presenters include former Prime Ministers, renowned scientists and award-winning journalists. Our stories have travelled the world and won prizes. We are always looking for ways to innovate and surprise. We’ve formed successful partnerships with broadcasters such as ABC, SBS, BBC, Al Jazeera, DR, VPRO, ARTE and worked with producers in Europe and the US with many more exciting collaborations in the pipeline.

After The Sirens, directed & produced by Kevin Eastwood