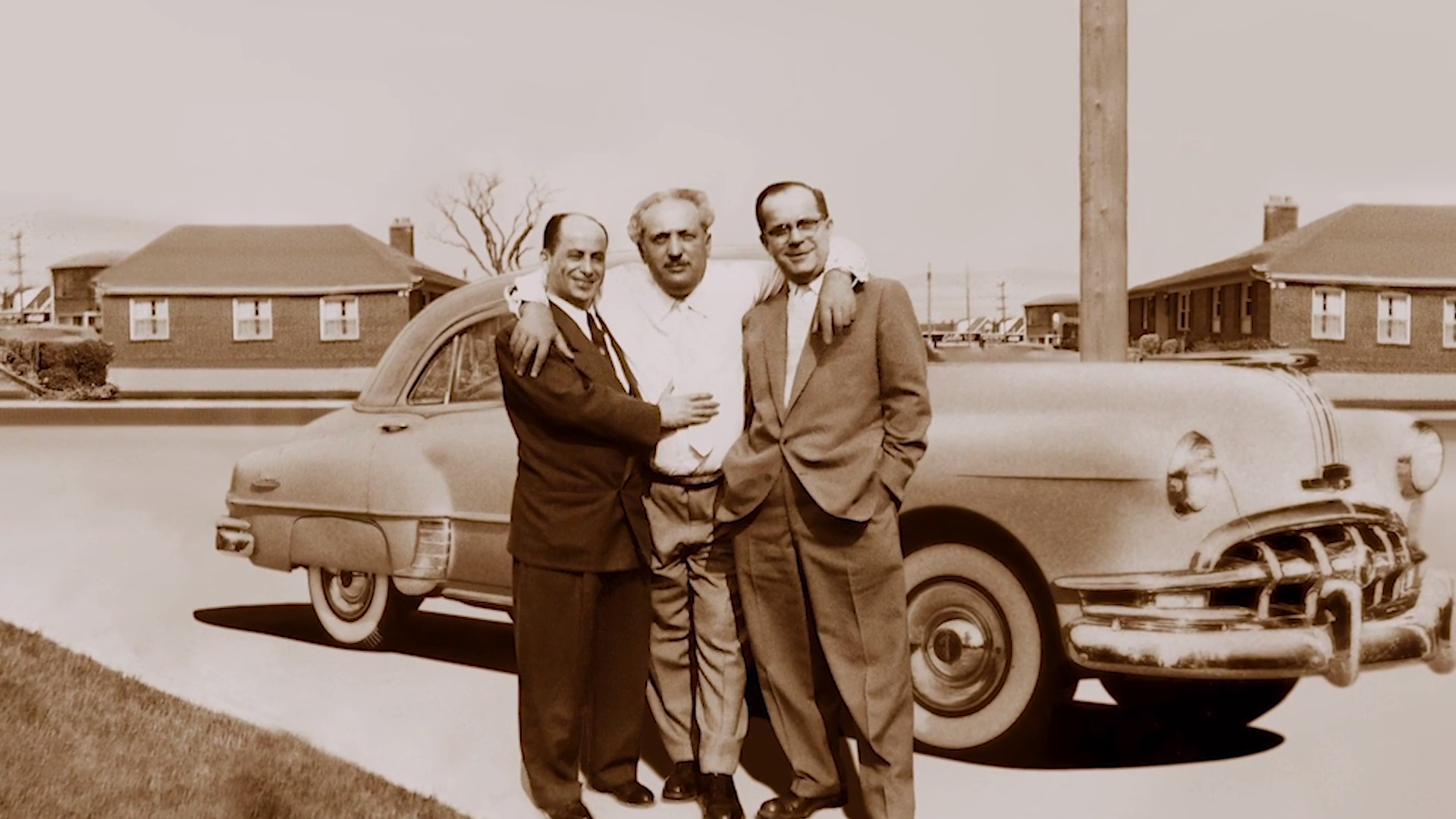 They escaped hell and built a haven.
The story of how Jewish refugees created Toronto’s housing boom for generations of immigrants.

Shelter
A film by Ron Chapman

Interviews are available with director Ron Chapman, and subjects from the film

“I think I had the best life. And I also think I had the worst life that anyone can have,” says Toronto real estate developer Mendel Tenenbaum in Ron Chapman’s documentary Shelter.

The worst can never be forgotten. A Holocaust survivor, Tenenbaum came to Canada with nothing, and virtually no place to live in a not entirely welcoming city. But Tenenbaum did what a resourceful collection of his fellow Jewish refugees also did. He reasoned that if work was hard to come by, and there was a shortage of housing, he could work building houses.

Shelter is a story of people who managed to survive, and then thrive, and in the process, turned Toronto, a “smaller city surrounded by farms,” into one of the most liveable cities in the world. In a city that once had laws banning Jews on Yonge Street, building was something Jews were not prevented from doing, and so they built, based on common sense approaches, such as situating high-rise properties near subway stations. Some half-million rental apartment units were built in Toronto by Jewish builders between 1952 and 1975.

The names and the companies are now entwined. The Greens (Greenwin Group), the Diamonds/Daniels (Cadillac-Fairview Corp.), the Tenenbaums (The Tenen Group), Sam Brown’s The Brown Group and characters like deal-maker Eddy Cogan, who connected them all (and was responsible, among other things, for the creation of the SkyDome).

Created to provide housing for one wave of immigrants and refugees, generations of others would call these same apartments home. This made possible the multicultural boom that saw Toronto’s population double to two million in a few decades.

Using memories of a few remaining visionaries and their offspring, with a compelling mix of first person stories, some never heard, and some never spoken until now, visually supported by enhanced archival footage and photos. The film traces the journey from Eastern Europe to North America, from Dachau to Toronto, and filmed with an international cast and crew from both continents with dramatic recreations. Shelter takes us through their early lives and incredible escapes. One was thrown from a train by his own father, to save him from the death camp everyone knew was at the end of the line. One matriarch became a resistance fighter, destroying bridges and supply lines with dynamite.

And all were desperate to find new lives. Shelter follows up with tales of creating an industry out of nothing, of ruses used to fool anti-Semites into selling their property, and of the self-created industry’s social circle, with multi-million dollar deals made over coffee at a deli called Stubby’s.

“These inspiring people in my film include some of the last living Holocaust survivors, who, against all odds, achieved the impossible,” says director Ron Chapman. “Their lives and the families they raised here in Toronto have contributed greatly to the growth and culture of this unique city. Their legacy is a testament to the benefits of successful immigration.”

The film’s score, composed by award-winning and internationally renowned Canadian music legend, Jack Lenz, has been licensed and will be released worldwide by Sony Music Masterworks, day and date with the film’s premiere.

Films will be available for 48 hours.

About Chapman Productions
Director and producer Ron Chapman is an award-winning Toronto filmmaker. His feature documentaries have garnered acclaim worldwide and have aired on major networks and platforms, including: Who the F**K is Arthur Fogel, featuring Lady Gaga, U2, The Police, Madonna, Rush, and key music industry insiders; The Poet of Havana, with Carlos Varela, Benicio Del Toro, Jackson Browne; The Forbidden Shore, an in-depth exploration of Cuba’s top musical artists.
Chapman’s latest concert film, Carlos Varela Live in Havana released internationally in January 2021, along with a special limited edition boxed set including The Poet of Havana, Carlos Varela Live in Havana, and a double album of the live concert. And his latest documentary feature From Earth to Sky, the story of seven indigenous architects from Turtle Island, will have its world-premiere on TVO June 21, 2021, National Indigenous Peoples Day.

He is currently in production on a new music documentary investigating 1969’s The Toronto Rock N Roll Revival – what Rolling Stone Magazine called “the second most important event in rock history” – with John Lennon and the Plastic Ono Band, Bo Diddly, Jerry Lee Lewis, Chuck Berry, Gene Vincent, The Doors, Chicago and more, to be released 2022.  Chapman started out as a musician then became an artist manager, record producer, club owner, and concert promoter; and evolved to develop his own film production company, and advertising agency, where he produced and directed commercials for international brands. His album of original songs, As Worlds Collide, is on Current Records, with recent single and video “Turn Away”.  Shelter will have its world premiere as the opening film of the Toronto Jewish Film Festival, June 3, 2021.

Founded in 1993 by Artistic Director, Helen Zukerman, the TJFF was created to heighten awareness of Jewish and cultural diversity in Toronto and around the world. Films have included such world renowned hits as: Sublet (Eytan Fox), Shiva Baby (Emma Seligman), Tel Aviv on Fire (Sameh Zoabi), Fiddler: A Miracle of Miracles (Max Lewkowicz), RBG (Betsy West, Julie Cohen), A Tickle in the Heart (Stefan Schwietert), and Hebrew Hammer  (Jonathan Kesselman), as well as Academy Award-winners The Counterfeiters (Stefan Ruzowitzky), and West Bank Story (Ari Sandel). The Canadian Archival series shines a light on the rarely seen Jewish contributions to Canadian film and television. TJFF is presented by the Toronto Jewish Film Foundation, which runs programmes and events throughout the year and the GTA. TJFF2021 Online runs from June 3 – 13, 2021. For more information, visit tjff.com.