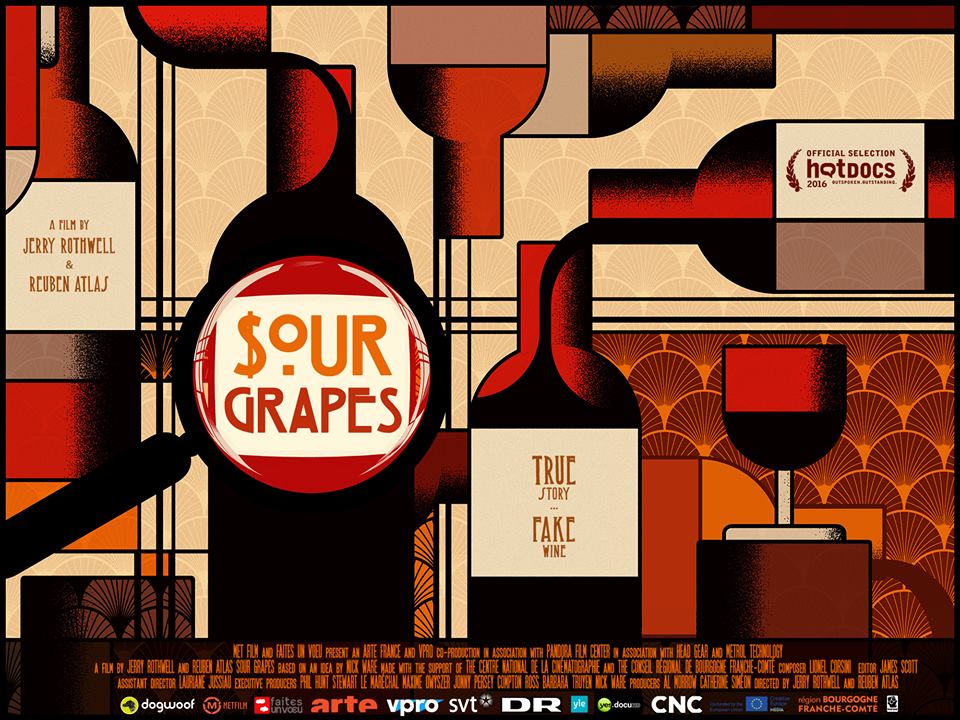 “On an 1858 bottle we found Elmer’s glue… and Elmer’s Glue didn’t come in until the ‘70s.”
– Billionaire wine collector Bill Koch

It was worth exactly what people were willing and able to pay. A lot of it was secretly worthless – a market filled with “toxic assets” that finally hit the fan in the late ‘00s.

But it’s not the sub-prime mortgage market. It’s wine.

Sour Grapes is Jerry Rothwell and Reuben Atlas’s fascinating documentary about the meltdown of this century’s out-of-control auction market on rare wines. It’s a confounding crime story that affected, and probably still affects, some of the richest wine-lovers in the world – people who routinely paid up to $100,000 a bottle for cellar bragging-rights.

The film had its world premiere recently at the Hot Docs Canadian International Film Festival – all screenings were sold out – and will now be hitting theatres across Canada, beginning in Toronto on May 27.

Its cast of characters include, Rudy Kurniawan, an Indonesian con-artist who passed himself off as a world-class wine expert (and may indeed have possessed such skills) and who created buzz around his name by whipping up previously-staid art auctions into bidding frenzies. When arrested for various fraud charges, the wines he’d procured had sold for an estimated $100 million.

A group of Hollywood producers who created an ad hoc wine-loving fraternity around Rudy and gave him credibility with high-rollers.

Bill Koch (of the infamous conservative financier family), who discovered that some 400 bottles – or about $4 million worth – of his cellar inventory was fake, and who paid heavily to create an investigation team to track the source of the counterfeits.

And Laurent Ponsot, a French burgundy producer, who noticed some of “his” product in auction catalogues with impossible vintages, and who set out to redeem his family’s honour.

Sour Grapes is ultimately a tale of vanity, greed, pride and leftover questions about a market gone incredibly wrong for one of life’s greatest bottled pleasures.

“The wine market is comparable to fine art,” says Reuben Atlas. “If you put a lot of study into the history and the culture… where the wine came from, you care deeply about it. And then there’s the part that speculation and the involvement of the financial world had in turning wine into a commodity like stocks.”

Adds Jerry Rothwell: “Ponsot says the feeling you get from wine has no price. You can’t equate wine to money. I myself don’t think I’d ever spend much more than $30 on a bottle of wine.”

ABOUT BLUE ICE DOCS
Founded in 2014 in partnership between Robin Smith, president of KinoSmith, and Blue Ice Group co-owners, Steven Silver and Neil Tabatznik, Blue Ice Docs uses the expertise and skills of both organizations to acquire, fund and develop a wide variety of non-fiction projects from around the world. Recent releases include Requiem For The American Dream, The Look Of Silence, Hip Hop-eration, and Speed Sisters. Upcoming titles: The Missing Ingredient, Author: The JT Leroy Story, Deprogrammed and Wizard Mode.