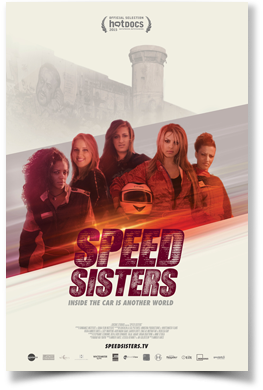 Director Amber Fares will be in attendance for a Q&A following the 6:30 pm screenings on Monday, March 14 and Tuesday, March 15.

Grabbing headlines and turning heads at improvised tracks across the West Bank, ‘The Speed Sisters’ is a racecar driving team made up of five women who have sped their way into the heart of the gritty, male-dominated Palestinian street car-racing scene.

Weaving together their lives on and off the track, SPEED SISTERS takes you on a surprising journey into the drive to go further and faster than anyone thought you could.

SPEED SISTERS is Lebanese-Canadian producer/director Amber Fares’ first feature film. Raised in Northern Alberta, Fares first travelled to the Middle East as a way to better understand her Arab heritage, a journey that eventually led her to the West Bank and this extraordinary group of women.

“Each one in her own way took me on a ride through Palestine that I will never forget,” said director Fares. “They taught me to push boundaries, while still respecting your community. They taught me about resistance, about not giving up and what it means to stay true to your dreams despite endless obstacles”

About Blue Ice Docs
Founded in 2014 in partnership between Robin Smith, president of KinoSmith, and Blue Ice Group co-owners, Steven Silver and Neil Tabatznik, Blue Ice Docs uses the expertise and skills of both organizations to acquire, fund and develop a wide variety of non-fiction projects from around the world. Recent releases include Requiem For The American Dream, The Look Of Silence, Deep Web, and The Last Gigolos. Upcoming titles: The Forecaster, Tomorrow We Disappear, Hip Hop-eration, and Censored Voices.