THE LADY IN THE CAR WITH GLASSES AND A GUN, directed by Joann Sfar – Opens December 18 in Toronto and on VOD/iTunes 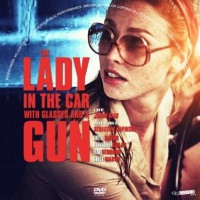 Based on a novel by Sébastien Japrisot

In French with English subtitles

And on iTunes and On Demand December 18

Based on Sébastien Japrisot’s (One Deadly Summer, A Very Long Engagement) 1966 award-winning novel by the same title, Joann Sfar’s old-school stylized thriller The Lady in the Car with Glasses and a Gun opens in Toronto for a theatrical run on December 18, at the Carlton Cinema through Video Services Corp (VSC).

The film is a stylish psychological thriller about a beautiful secretary who steals her boss’ sports car to go joyriding. She ends up in a seaside town she swears she’s never been to, but everyone knows her name somehow. When a body turns up in the truck of the car, she is suddenly the lead suspect in a murder she knows nothing about. Is she going insane?
The Lady in the Car with Glasses and a Gun is internationally renowned comic book artist, novelist and musician Joann Sfar’s third feature directorial effort. His two previous films (The Rabbi’s Cat, Gainsbourg: A Heroic Life) earned him multiple awards and critical acclaim in the international festival circuit, praising his unique use of fantasy artwork, animation and puppetry.

The film stars Freya Mavor (“Skins”), Elio Germano (My Brother Is an Only Child), and Stacy Martin (Nymphomaniac).

The Lady in the Car with Glasses and a Gun