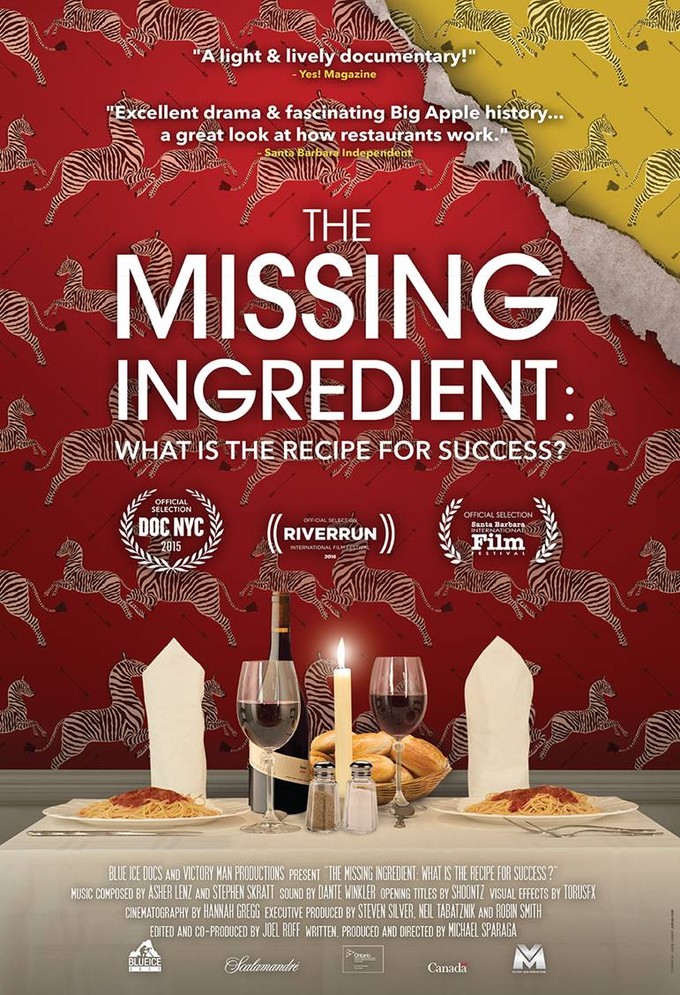 How do you make a restaurant so iconic that both Woody Allen and Wes Anderson are inspired by it?

The Missing Ingredient: What is the Recipe for Success?
A Michael Sparaga film

Director Michael Sparaga and Pescatore’s Charles Devigne will be in town and available for interviews.

A sold-out hit at DOC NYC, Michael Sparaga’s The Missing Ingredient: What is the Recipe for Success? is a charming and insightful exploration into what makes an everyday restaurant into an institution. The Toronto-based filmmaker will serve up his film for Canadian audiences beginning July 15, when the film will start its theatrical run at the Bloor Hot Docs Cinema.

The film will be released on home video in the fall in Canada by Blue Ice Docs and in the US by Virgil Films & Entertainment, which recently acquired the film for the US market.

The filmmaker’s quest to define this intangible formula focuses on two Manhattan restaurants: Gino’s, an Upper East Side fixture with over half a century of history behind it, and a list of remarkable regulars that included Frank Sinatra, Sophia Loren and John Lennon, to name a few.  Known for its iconic zebra wallpaper so striking it caught the eye of Woody Allen and Wes Anderson who featured it in their films Mighty Aphrodite and The Royal Tenebaums, respectively, Gino’s unique décor also inspired a restaurateur looking to turn his place into an institution.

Enter Charles Devigne, the owner of Pescatore, a Midtown staple trying to survive a changing neighbourhood now saturated with stiff competition. An artist-turned-enterpreneur, Devigne is bent on deciphering the recipe that will take his restaurant to full-blown institution status. How can he replicate Gino’s success? What will it take to make sure Pescatore stands the test of time?

“This movie is a love letter to all those old school, multi-generational restaurants that exist in every city, all over the world,” said Sparaga. “I’m delighted to be partnering with Blue Ice Docs and Virgil Films in bringing it to audiences.”

The film is Director Sparaga’s first feature documentary. The Missing Ingredient: What is the Recipe for Success? is produced by Michael Sparaga, co-produced by Joel Roff, and executive produced by Robin Smith, Neil Tabatznik and Steven Silver.

Torontonians will also get their say on what makes up the winning recipe by entering a contest Blue Ice Docs and BlogTO have teamed up to create. By choosing their favourite dinning establishment from a list carefully selected by BlogTO’s food writers, voters will get a chance to win tickets and a dinner for them and their friends at the winning restaurant.

ABOUT BLUE ICE DOCS
Founded in 2014 in partnership between Robin Smith, president of KinoSmith, and Blue Ice Group co-owners, Steven Silver and Neil Tabatznik, Blue Ice Docs uses the expertise and skills of both organizations to acquire, fund and develop a wide variety of non-fiction projects from around the world. Recent releases include Requiem For The American Dream, The Look Of Silence, Hip Hop-eration, andSpeed Sisters. Upcoming titles: Author: The JT Leroy Story, Deprogrammed and Wizard Mode.

ABOUT VICTORY MAN PRODUCTIONS
Victory Man Productions is a Canadian independent, award-winning, production company specializing in the production of commercially viable feature films and television programs that can compete in the domestic and international marketplace.  Previous productions include the TV-hour doc Maple Flavour Films, and the feature films Sidekick and Servitude, which was the first film greenlit for production out of the Telefilm Canada Features Comedy Lab, a CFC Film Program in collaboration with Just For Laughs.

ABOUT VIRGIL FILMS
Virgil Films & Entertainment was founded in 2003 by Joe Amodei to acquire, market and distribute DVD, TV and Digital product in the theatrical feature film, documentaries, special interest and sports categories. The company has built partnerships with OWN, Sundance Channel Home Entertainment, National Geographic Cinema Ventures, Pure Flix Entertainment, MLB Productions, Morgan Spurlock’s Warrior Poets and other high-profile entertainment brands since their inception. Releases from Virgil Films & Entertainment include the Oscar-nominated documentary Glen Campbell: I’ll Be Me; the award-winning documentary Miss Representation; the critically acclaimed, timeless, best-selling Forks Over Knives; and the Oscar-nominated documentary Restrepo and its sequel Korengal. They have also released the compelling I Am Chris Farley, A Brony Tale, Legends of the Knight and others. Follow them on twitter: @virgilfilms |www.VirgilFilmsEnt.com.