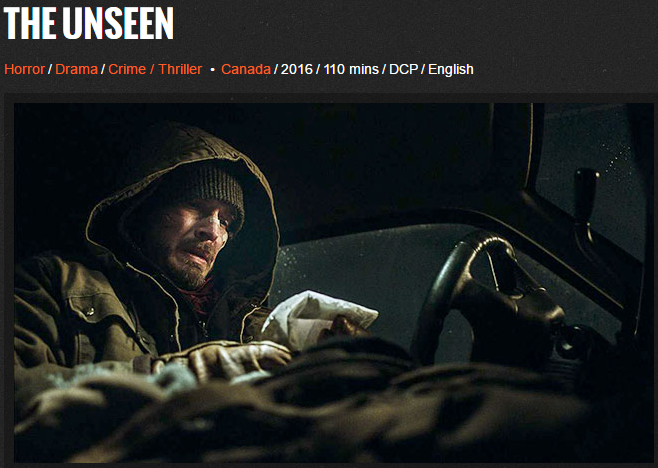 THE UNSEEN
A film from Geoff Redknap

The Unseen will finally show itself at Fantasia.

Geoff Redknap’s debut feature, The Unseen, will have its world premiere at the Fantasia International Film Festival, in Montreal July 17 at 9:45pm at J.A. De Seve Theatre, with an additional screening July 22 at 12:45pm at Concordia Hall Theatre.

In a modern retelling of the classic The Invisible Man, The Unseen is about Bob Langmore (Aden Young) a former hockey player, now a struggling mill worker who years earlier mysteriously abandoned his family and isolated himself in a small northern town.  He returns for one last chance to reconnect with his troubled daughter Eva (Julia Sarah Stone), but must partner with Crisby (Ben Cotton), a strung-out animal trafficker, to finance the trip.  When he discovers Eva is missing, Bob will risk everything to find her including exposing the secret that he is becoming invisible. The film combines the drama of a family disintegrating both figuratively and literally, in this gritty action science fiction thriller.

The Unseen is written and directed by Vancouver’s Geoff Redknap and is his first feature film. Redknap is best known for his special makeup effects work on Deadpool (2016), The Cabin in the Woods (2012), Warcraft (2016), The X-Files (TV series) and the upcoming Star Trek Beyond (2016) to name a few.  The Unseen stars Aden Young (Rectify, Black Robe), Julia Sarah Stone (The Killing, Falling Skies, Wet Bum), Ben Cotton (Battlestar Galactica) and Camille Sullivan (The Man in the High Castle), Gemini nominated (Shattered) and Leo Award winner (Normal).

The Canadian production is produced with the participation of Telefilm Canada and produced by Katie Weekley for Goonworks Films.