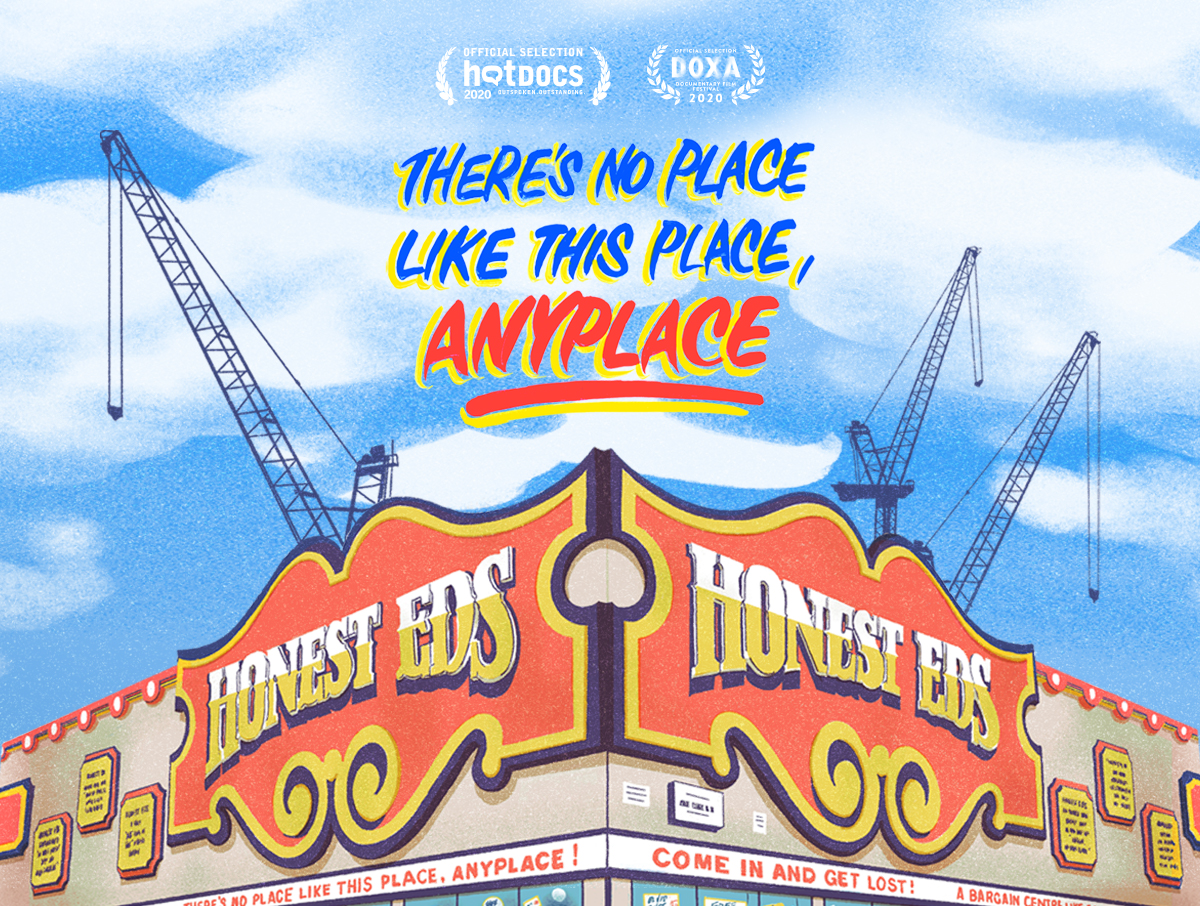 There’s No Place Like This Place, Anyplace
a film by Lulu Wei

Director Lulu Wei and film subjects are available for interviews.

With its flashing lights and kitschy hand-drawn signs, Toronto’s Honest Ed’s discount palace was a veritable “welcome mat” for New Canadians, with immigrants shopping and working under its roof for nearly 70 years.

Conversely, its recent acquisition and demolition by a high-end developer meant many in the West end community had to figure out where they were heading next – including employees, residents of adjacent buildings and artists in the storied Mirvish Village.

One of those affected was filmmaker Lulu Wei, whose homey upper-floor flat almost immediately became the subject of impending building-sale rumours.

With events unfolding around her, she decided to document them to ensure future generations could still experience the colourful reality of Mirvish Village. In the process, she became more involved and joined in with community meetings that were underway to preserve the neighbourhood.

The result is There’s No Place Like This Place, Anyplace – a title taken from the large folksy slogan that greeted shoppers at the door of the landmark building at Toronto’s Bloor/Bathurst intersection.

The film traverses the past, present and possible future of the neighbourhood that evolved around the business of entrepreneur and showman Ed Mirvish – from its days as a one-stop shop for the working class, to its vulnerability in the era of Wal-Mart, Amazon, and dollar stores. (“I think of businesses having a lifetime just like humans,” David Mirvish says in announcing the sale of the building to Vancouver’s Westbank Corporation.)

We meet colourful folk, like artist/gallery-owner Gabor Mezei, who tries to empty out 40 years of memories with a midnight deadline, or Julia Castorina of Gigi’s House of Frills, who recalled life in the Village in Honest Ed’s heyday as being “like you’re on a TV show.”

We’re even introduced to the reluctant destroyers, including a young demolition crew member named Brandon, who admits, “I’m taking down my dad’s memories.”

On the ground, organizers like bookstore owner Itah Sadu (whose adjacent store A Different Booklist chronicles Black history in the city), articulate what it means to be a community and their fears of a future that doesn’t include them.

And then there are the powerful players, including the developers and the politicians on two levels of government, trying to come up with an accord to provide “affordable” rents in their new 800-unit luxury building (which arguably don’t turn out to be very affordable at all).

But the underlying question in There’s No Place Like This Place, Anyplace is, what happens when you raise a community and replace it with buildings. Can its spirit survive?

“I was living on the Honest Ed’s block when everything was changing, and I wanted to document the magic of the neighbourhood before it was too late,” says director Lulu Wei. “I’m fascinated by how we build our cities and who we’re building them for, and wanted to explore the line between preserving the parts of our cities that make them special while creating new spaces since we’re in the middle of a housing crisis. Getting affordable housing isn’t easy, it’s a constant struggle with an unclear road map for everyone whether it’s community members or developers.

“I’m eager for people to have a chance to watch this film on CBC,” continues Wei, “ because while this story takes place in Toronto, the same questions exist across Canada: how can we create the liveable and affordable cities we need? I’m excited to have that conversation nationally.”

Ali Weinstein came on as producer and through the Reelworld Film Festival talent lab, the film was chosen to receive funding from Telefilm Canada’s Talent to Watch program. Then the film received funding from the Hot Docs CrossCurrents program and the Toronto Arts Council. And finally the CBC came on board as a funder and broadcaster.

About Lulu Wei
Lulu Wei is a Toronto based filmmaker and cinematographer. She holds an MFA in Documentary Media from Ryerson University. Her work explores themes of urbanization and cultural identity. Her short films and installations have been screened and exhibited at various festivals such as Images Festival, Planet In Focus Film Festival, and Inside Out Film Festival. She has worked as a cinematographer and camera operator on numerous projects, most recently on John Greyson’s latest feature Last Car. Previously, she has been a member of the International Cinematographers Guild (IATSE 667) and worked in the camera department on television shows such as Orphan Black, Nikita and Degrassi. Outside of film, she has shot and directed commercials for brands such as Air Canada, Mazda, and Converse. She was a fellow at the RIDM Talent Lab, a participant in the E20 program at Reelworld Film Festival in 2017, and a Hot Docs Doc Accelerator fellow in 2018.