Dinner is served at the “Olympics of Table Setting”
– along with feverishly imagined table themes and cut-throat frenemies,
all vying for a Best of Show ribbon.

A film by Scott Gawlik 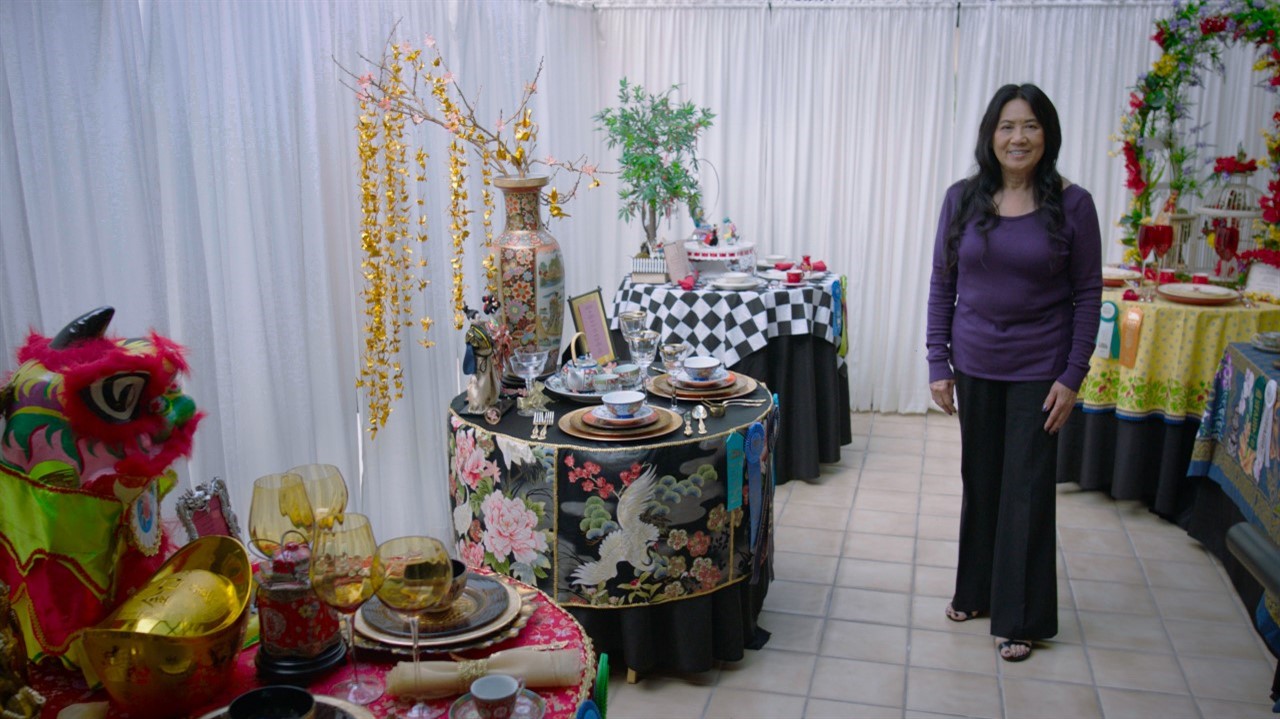 Behind the happy exterior of rides and corn-dogs, California’s Orange County Fair plays host to a major event in the serious world of competitive formal table setting.

Yes, you read right. A history of proper placement of cutlery, plates, bowls, wine glasses, candles and butter trays – a legacy upheld by the legendary etiquette queen Emily Post – is honoured each year in an event often referred to as “The Olympics of Table Setting.”

For the contestants, it is serious business, six months in the planning. For Scott Gawlik’s doc SET!, it is an entertaining glimpse into an odd passion that connects a group of disparate and eccentric people from various walks of life – a salve to the soul in troubled times.

Tim Wyckoff, an unemployed Garden Grove, California resident who also has a passion for genre and “cosplay” competition, says his passion keeps him “from focusing on how things aren’t so great right now.” In performance mode, he lights up rooms.

The entries can be more like parade floats than dinner settings. Each has a theme, and the personalities involved know they’ve got to go big or go home. Hence Janet Lew, who travels the world to find table items, and keeps dozens of tables “set” year-round at her house, but never eats off them, or the artistic-minded Hilarie Moore, who finds inspiration in a sensory deprivation tank, and once entered a New Year’s Eve setting featuring a table-top of formally-dressed freeze-dried mice.

And reigning champion Crystal Young comes by her showmanship honestly, being the daughter of Sandra R. Courtney, a former Hollywood starlet (she was Zorro’s TV girlfriend in the ‘50s), who has a theatre in her name, and helps Crystal with her staging and props.

Resources also vary. Tim’s theme, based on Dr. Seuss’s Oh, the Places You’ll Go!, is entirely composed of colourful dollar store items (and is a favourite with parents and children), while others buy their own expensive Waterford Crystal and, in one case, created a gold butter spreader by paying to have a silver one dipped in molten gold.

“All this money to try and win a 50-cent ribbon,” one husband complains.

We get glimpses of the therapeutic effect of this passion. Tim uses it to overcome depression. Crystal pours herself into her project with her widowed mother to expedite the grieving process over her father’s recent death.

Others use the competition to bond, like the loving/squabbling mother-daughter team of Marie and Christel Schoenfelder, or “Water Babes” Cheryl von der Helle and Ginnie Jacobs, who consult with the women of their swim club throughout the process.

And throughout SET!, competition day looms. Will heads explode when Hilarie and Bonnie Overman discover they both have an African-themed setting?

And will egos survive the eventual encounter with brutal and strict  judges Kim and Diana?

“In the summer of 2018 I attended the Orange County Fair,” says filmmaker Scott Gawlik. “Dizzy from a cocktail of bacon & pineapple ‘double glaze’” donuts, and half a gallon of beer, we ducked into an air-conditioned building, and couldn’t believe what we saw. Rooms with tables all set in different arrangements. We quickly learned this was an annual Table Setting Competition. And similar to the phenomena of dogs being able to predict earthquakes…. my senses told me this needed to be a movie…or maybe it was just the beer speaking.”

SET! will make its World Premiere at Hot Docs 2021.

Fanny: The Right to Rock

The Return: Life After ISIS