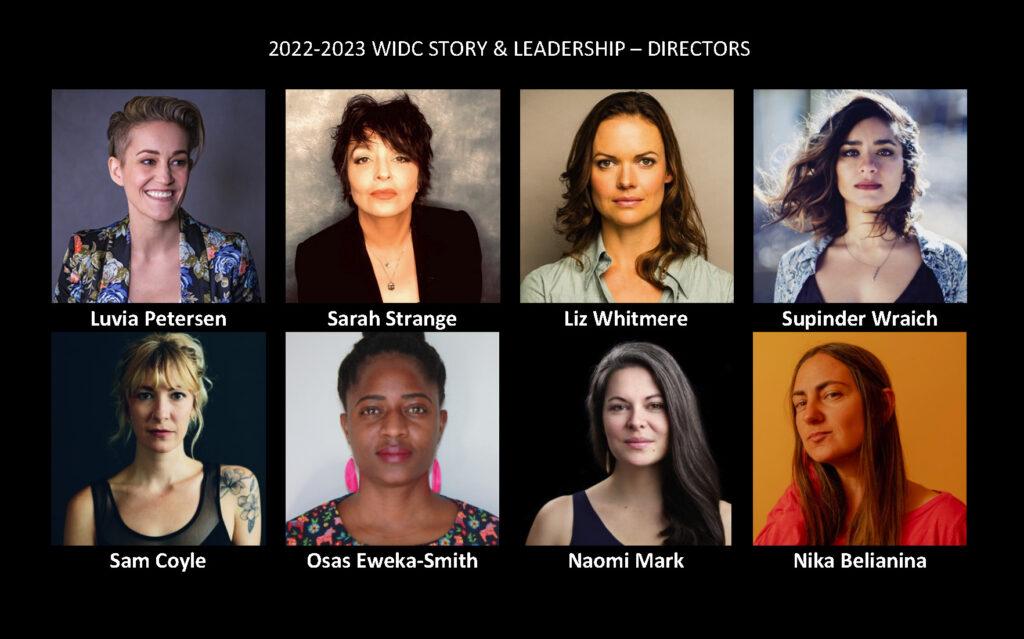 Also developing their debut feature films are documentary and short filmmakers including Nigerian-born Nova Scotia-based Osas Eweka-Smith  who is developing the drama The Road To Back Home; Yukon Territory-based Naomi Mark (How to Bee), developing the dark comedy Lucky Baby; and based in Toronto, multi-award-winner Nika Belianina is developing her comedy feature, Doing Time In Paradise.

“Telefilm Canada is proud to continue its support of the Women In the Director’s Chair (WIDC) program for mid-career and non-binary directors and writer-directors,” said Francesca Accinelli, Interim Executive Director and CEO of Telefilm Canada. “We want to thank and congratulate WIDC for its continued support of diverse voices in film.”

“Over 330 women and non-binary individuals have benefited from the WIDC program,” says Eleanor Noble, President ACTRA National. “Over 25% of alumnae directors [overall] are ACTRA members who have taken their performing skills to the next level and are creating and directing original work that engages other members!”

“This is the 9th year of our collaboration with WIDC that continues to deliver significant results. It’s gratifying to see previous participants returning with projects they’ve developed through the program, as mentors, and guest speakers,” says Angela Heck, Executive Director, Whistler Film Festival.

During the WFF Industry Immersion part of the program, the eight director participants partake in a first-class industry environment (virtual and in-person) that includes an array of master classes, artist-talks, one-to-ones, and notably, WFF’s Women In Focus series. WIDC-hosted sessions also include industry guests from Telefilm Canada, Bell Media, CBC Films,  the Independent Production Fund, and Creative BC, among others who will participate in roundtables and individual meetings with participants.

Story & Leadership culminates with intensive follow up development of story and marketing materials, and career coaching modules that run through to spring 2023.

WIDC recognizes the term Woman/Women is in an evolution of language and note that our intention in our use is to be fully inclusive of underrepresented persons who may identify as she / her and or they / them and share the goals and values of WIDC to promote these marginalized voices and stories.  Further, we gratefully acknowledge that the WIDC program originates from the traditional and unceded lands of the Coast Salish people, including the xmkym (Musqueam), Swxwu7mesh (Squamish), and slilwta (Tseil-wau-tuth) Nations. We also acknowledge the Indigenous Nations on whose traditional lands our guests, participants, and colleagues live, work and create. We commit to working together in the spirit of collaboration and respect for the generations that came before, those living now, and the generations to come.

About WIDC
Founded in 1996/97, Women In the Director’s Chair (WIDC) is an internationally respected Canadian professional development offering, specially designed to advance the skills, careers and fiction screen projects of women directors. With 230 director alumnae across Canada, who earn hundreds of awards and nominations for their work annually. Co-created by representatives of ACTRA, Women In Film and Television Vancouver, and The Banff Centre for Arts and Creativity which was its home venue for eighteen years, WIDC is presented with major support from Telefilm Canada, and with the participation of Creative BC, Actra Fraternal Benefit Society, ACTRA National, Independent Production Fund.

About Whistler Film Festival
From November 30 to January 2, WFF will deliver an in-person and online event with an inclusive program that both facilitates the human connections we crave and is accessible to national audiences from the comfort of their homes. Tickets, packs and passes are on sale now at whistlerfilmfestival.com