the history they didn’t teach you in school

Just Dropped Episode 3
How The Cold War Started… In Ottawa 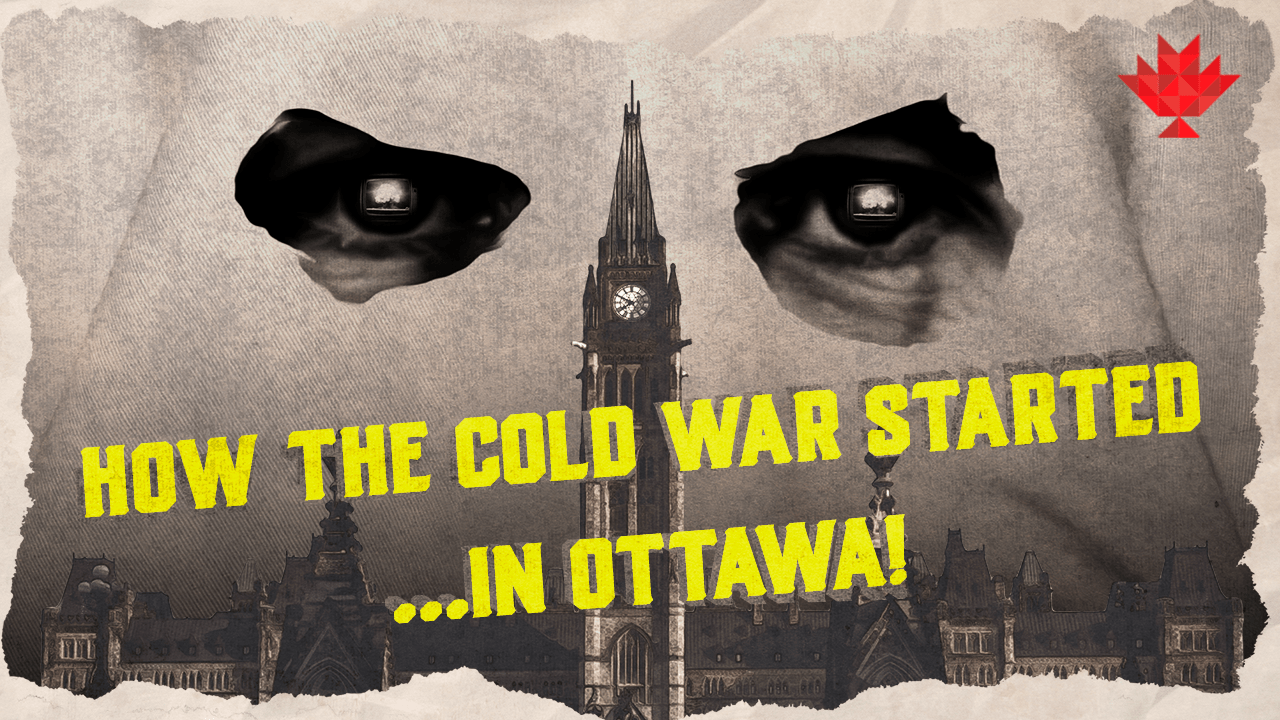 Season 3, Episode 3 – How The Cold War Started… in Ottawa

All episodes can be viewed on YouTube ThisIsCanadiana.com here

Canadiana, the myth-breaking documentary series that exposed a sham trial following the assassination of a Father of Confederation, unearthed the cosmic connection between Sudbury’s mining history and the search for dark matter, and traced prehistoric camels to the Yukon, is back for a 3rd season.

The award-winning series seen on YouTube, from documentary filmmakers Ashley Brook, Kyle Cucco and author/historian/host Adam Bunch, makes use of evocative footage, archival imagery and cheeky animation to make the past live and breathe.

Their version of history takes us beyond bland names and dates. It tells stories of real people, clashes of personalities, acts of passion, greed and often outright criminality that played their part in our present.

Season 1 included the heart-wrenching story of Marie-Josèphe Angélique, an enslaved woman in Montreal sentenced to death for a great fire in the 18th century. Season 2’s treasure trove of tales included the kangaroo court that followed the assassination of Father of Confederation Thomas D’Arcy McGee, in which Canadian Prime Minister John A. Macdonald himself may have helped steer the verdict.

And the 10-episode, 10-minisode 3rd season, which begins, appropriately enough, the week of Canada Day 2022, opens with a two-parter about Canada’s history of piracy along the Gulf of St. Lawrence and the Maritimes. It time-hops to the Cold War, with the absurd tale of the defection in Ottawa of Soviet cipher clerk Igor Gouzenko, who had trouble convincing journalists and government officials that he was, in fact, a spy.

In another two-parter, we learn about one of Quebec’s most infamous folk tales. An accused murderess whose alleged killings propelled her sad story into the realm of fantasy and witchcraft.

And the series returns to the Yukon for the story of the “Klondike Kates,” dancehall queen (and eventual Hollywood star) Kate Rockwell and restaurateur, constable and adventurer Kate Ryan – both legends for very different reasons.

Of note this 3rd season, is the participation of Parks Canada. Historian Bunch notes: “They put us in touch with locals who are very knowledgeable about the history of those sites and stories. Those people gave us information, leads, access to sites, and sometimes gently corrected us when necessary.  It is one of the perks of doing Canadiana, that we get to travel the country, meeting people who dedicate their lives to exploring the history of that one place they know so well.”

Canadiana is produced with the financial participation of The Bell Fund, The Canada Media Fund, The Government of Canada, and Parks Canada.

Episode 1 – The Rise of Piracy in Canada: Part One – online now

When we think of swashbuckling tales of pirates and plunder, we think of Blackbeard, palm trees, and the sun-scorched shores of the Caribbean. Yet, some of the most ruthless men and women of the seven seas raised hell up North, in the Gulf of St. Lawrence and along the jagged coasts of the Maritimes. Take to the lawless seas in search of treasure and tall tales in a veritable “who’s who” of pirates and privateers on Canada’s East Coast.

Climb back on board, ye mateys, to witness the turbulent end of “The Golden Age of Piracy” in Canada. We sort fact from fiction in one of the most thrilling time periods in the country’s history, to find out how East Coast piracy…turned legitimate.

Episode 3 – How The Cold War Started in Ottawa – online now

The Alaska Highway. It stretches for over 2,000 kilometres—the equivalent of the distance from Toronto all the way to Regina — from Alberta, across the Rockies, through the Yukon, all the way into Alaska. It’s been called “one of the greatest engineering feats of modern times.” But this Canadian highway wasn’t built by Canadians; it was built by a foreign army — at a time when what happened in the remote Canadian North had the potential to change the course of world history.

Episode 5 – The Witch of Quebec: Part One

Louis Étienne Dodier’s body was found in his barn in Quebec on the morning of January 27, 1763. The cause of death? Blunt-force trauma to the back of his head. At first, the culprit was obvious: clearly he’d been kicked by his horse. However, rumours began to swirl—rumours that his wife and father-in-law had something to do with Dodier’s demise. Thus began an investigation which would culminate in an execution so brutal, so heinous, that it would literally haunt La Belle Province for hundreds of years. This is the story of Canada’s most notorious witch, La Corriveau.

The twisted tale of La Corriveau continues. Nearly ninety years after Marie-Josephte Corriveau was hanged for murder, an unsuspecting gravedigger stumbled across her cage. Soon, whispers about nightly dances on Ile d’Orleans, and bewitched travelers, were spreading from the South Shore to the rest of New France. And when the infamous PT Barnum got word, La Corriveau’s tragic tale went mainstream. Discover how a murderess became a legend whose story grew more horrifying and fantastic each time her name was uttered.

Episode 7 – The Horse That Built Canada and “The Little Iron Horse.”

It’s a distinctly Canadian breed, with roots stretching back more than 300 years to the early French-Canadian pioneers. It had to be a rugged breed to survive the rigours of the Canadian climate­—and in the centuries since, that toughness has served it well: the Canadian Horse has plowed fields, hauled wood, and even fought on the frontlines in times of war. But as strong as it is, the Canadian Horse has barely survived: more than once, the National Horse of Canada has nearly gone extinct. And today, it’s still in danger. Fly to the remote oasis of Sable Island to run with the wild horses, and learn the incredible story behind not only the island, but the 340 year-old odyssey of the Canadian Horse.

Episode 8 – The Canadians of the Civil War – Part One

The American Civil War wasn’t just an American war. Tens of thousands of Canadians fought in its battles. Most of them joined the Union cause, many of them Black, risking their lives to end slavery south of the border. Some Canadians became soldiers, others became spies, and some even helped start the war in the first place. But while many rushed south to join the fight, still others worried the war was about to spread north of the border.

Episode 9 – The Canadians of the Civil War – Part Two

Not all Canadians were on the right side of history during the American Civil War. A disturbing number supported the Confederacy. Officially neutral, the Canadian colonies became a hotbed of Confederate activity. Southern spies used cities like Toronto, Montreal, Halifax and Saint John as bases to launch secret plots against the Union. There were assassination attempts, bank robberies and border raids. And for a while, it even seemed as if Canada might get dragged into the war, joining the side of the Confederates, and supporting their hateful cause.

A tale of two tenacious women competing for a legendary title. Meet Kate Ryan, the adventurer, prospector, constable, restaurateur; and Kate Rockwell, the scandalous dancehall queen who became a Hollywood idol. Both were iconic figures of the Yukon Gold Rush—but for very different reasons. Find out which one was the real Klondike Kate.