In a reserve full of secrets, a teen with a camera begins peeling back the past 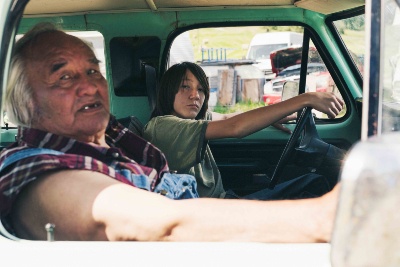 VOD, November 9, 2021 – Across Canada On All Major Platforms

Coming off a super-successful festival run where Portraits From a Fire won Best Canadian Feature Film at the Edmonton International Film Festival; and was honoured with the BC Emerging Filmmaker Award from the Vancouver International Film Festival, it will now move on to have a special Canada-wide in-theatre screening through Landmark’s Spotlight Series on November 1 and a cross-Canada VOD release on November 9.

In Trevor Mack’s youth drama Portraits From A Fire, the terrible power of secrets comes full circle with modern twists. Elements of magical realism dovetail with digital “noise” as the dead flash back to life via technology and supernaturalism.

Tyler has the dreams of any kid with a camera. He envisions a career launch at the Sundance Film Festival. But for now, he’s wearing a tuxedo t-shirt, and debuting a space film with cardboard characters for an audience of three at his B.C. reserve.

It’s a dispiriting turnout for Tyler, who already experiences pixilated visions of a mother he never knew, and lives at arms’ length with a father who avoids him.

At the root of the loneliness he feels in his own community is the feeling, “I can’t help but think that they all know something I don’t.”

And then he meets a mysterious young man named Aaron. With the input of Aaron and the discovery of a long-lost digital memory card, Tyler comes to see his path, not in films about a sci-fi future, but in preserving the past. “You can live forever in your camera,” Aaron says, inspiring Tyler to frame the world around him by vlogging his reserve.

Of course, cinéma vérité is not easy to film in a community of secrets. Tyler’s alternate father figure, the wry elder Sammy, prefers that he make a Western, “so I can shoot a white man.”

But as he gets closer to the truth, people become uncomfortable, almost to the point of panic.

Award-winning Tsilhqot’in nation filmmaker Trevor Mack traces the birth of Portraits From A Fire to his lengthy recovery from a shattered jaw. “I had to review nearly every decision I had made which led me to lying in bed with my jaw wired shut. It was now time to listen,” he says.

“And listen I did. I heard the pain and tragedy my maternal family had gone through as survivors of residential school. But I also enjoyed hearing the echoing laughter my family still creates nearly every chance they get. I found that my decisions were not isolated; they were a continuation of a cycle that began long before I was even born.

“Portraits From a Fire is a universal story which explores how intergenerational trauma affects a family. It is also about how an unravelling family secret can destabilize a young boy’s heart, and the lengths he will go to seek comfort.”

Portraits From A Fire is produced by Rylan Friday, and Kate Kroll, and Executive Produced by Screen Siren’s Trish Dolman.

Cinematographer is by Kaayla Whachell, and the Editor is Elad Tzadok.

Portraits From A Fire is a story by Trevor Mack and Derek Vermillion. And is directed by Mack.

ABOUT PHOTON FILMS AND MEDIA

Launched in 2010, Photon Films and Media (photonfilms.ca), formerly Pacific Northwest Pictures, is a leading Canadian entertainment company specializing in the development, financing, production and distribution of feature films for the domestic and international marketplace. With an emphasis on high quality films from leading filmmakers in diverse genres, Photon Films brings those films to consumers with innovative forms of marketing and distribution across all distribution platforms.