A Powerful and Intimate Short Film from
Maya Annik Bedward 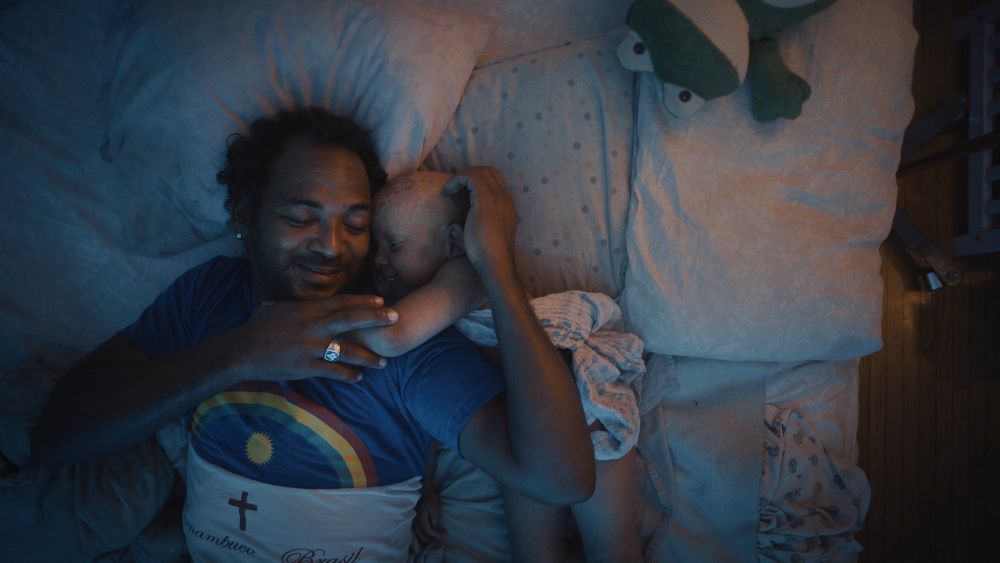 Maya Annik Bedward’s Why We Fight is a powerful and intimate documentary short whose title is a double entendre.

Gerdson Dias Alves – a.k.a. Sapo – is a master and teacher of the Brazilian martial art known as Capoeira. Brought to Brazil from Africa during the trans Atlantic slave trade in the 16th Century, it is as much a life philosophy and a game, so empowering to the country’s Black population that it was once illegal.

And for Sapo, it is key to coping with the day-to-day difficulties faced by him and his partner Lorena in Canada, as they care for their stricken son Nauê, who fights for his life daily.

Born with IFAP, a genetic condition so rare there are only 40 cases in the world, Nauê was not expected to live as long as he has. For Sapo, it means the focus has changed from trying to accept his son’s imminent death, to introducing him to Capoeira and its acrobatic, life-affirming magic.

“If we didn’t have Capoeira in our life, I don’t think Nauê would have gotten this far,” Sapo says.

Eventually, Why We Fight begins to focus on the dynamic of the family itself, as the daily rituals of caring for a special needs child alternately unites and divides Sapo and Lorena. The stress, work, hospital visits and care sometimes leaves the fatigued couple with frayed tempers.

But as Sapo puts it, “the day Nauê is not happy anymore, he’ll say, ‘Guys, thank you very much for the time, but it’s time for me to go.’” This concern puts a brake on any tendency to squabble.

Through Capoeira, and implicitly through the guidance of ancestors and living elders (Nauê’s grandmother is present in the film through video calls home), Sapo seeks the strength to get the most out of each day with Nauê. “For us to live in this world, you’ve got to be playful,” he says.

Director Maya Annik Bedward says she’s very inspired by Afro-Brazilian culture, including Capoeira and its role in the country’s history and traditions. “I lived in Brazil for a year, meeting dancers, musicians, artists, and storytellers. The vitality and creativity I saw there pushed me to finally pursue my creative passion for filmmaking.”

And she saw in Sapo, Lorena and Nauê, a story about the endurance of family and culture against the odds.

“What I thought would be a simple portrait, turned into a deep journey of love and understanding. Sapo, Lorena and Nauê opened their home to me with full trust and through them I witnessed what it really meant to be a family – the love, the fear, the fighting, the frustration and the care. It changed my life.

“My goal with this film is that it will give others a similar feeling of strength and hope that Sapo and his family gave to me.”

Why We Fight can currently be seen and streamed free across Canada through CBC Gem. And coming June 18 the film will be available globally through CBC’s YouTube Channel.

Maya Annik Bedward is a Jamaican-French Canadian filmmaker based in Toronto, ON. She holds an MA in International Communications from the University of Leeds and a BA in Political Science and Cinema Studies from the University of Toronto. After living in Brazil and the UK, Maya returned to Toronto to teach digital storytelling and stop-motion animation at the National Film Board of Canada. In 2015, Maya launched Third Culture Media with her producing partner, Kate Fraser. Their films have since screened at festivals across North America and Europe, and sold to Air Canada and the CBC. Maya’s short dramatic film THE FOREIGNER won Best in Show and the Audience Choice Award at the WIFT-T Showcase and her short doc THE HAIRCUT premiered at the Hot Docs International Film Festival. She is currently in development on her first feature film BLACK ZOMBIE with the documentary Channel.

The Face of Anonymous