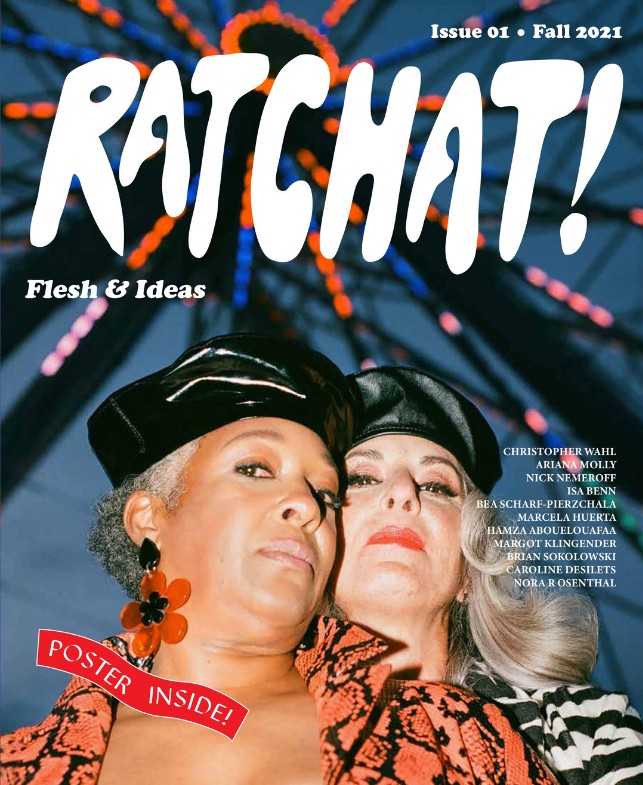 After more than a year of isolation from our families or with them, appreciation of intimacy has seldom been so widely felt. It’s a perfect public mood for the launch of Rat Chat Magazine, Nora Rosenthal’s eclectic and provocative lifestyle magazine.

Family is the underlying theme of this inaugural issue, which launches Oct. 15 with a party to celebrate at the Queen St. W., textile gallery 100% Silk, where the magazine will be available to purchase in Toronto. Also available online here, and in select stores in New York City, Los Angeles, the UK, Australia, Belgium, Brazil, Italy, Spain, and Sweden. The magazine is based on the belief that sexuality is culture, and seeks to celebrate both in the same publication.

“What does it mean to be a single mother who deeply values her sex life?” editor-in-chief Rosenthal says. “Or a straight woman in her 50s who finds love with a queer woman? Or a married couple that falls in love with another married couple? Or a filmmaker whose Afro-diasporic family has rejected the sexual and familial hegemony of colonization for generations? All these and more are the love stories found within.”

It is often true that publications with strong identities reflect their founding editorial voice, whether it be Helen Gurley Brown (Cosmopolitan), Tina Brown (Vanity Fair) or Oprah (O). In the case of Rat Chat, that voice comes with cross-cultural experience. Rosenthal has worked as a journalist, critic and filmmaker. As the Arts & Culture Editor at Cult MTL, she interviewed artists from Laurie Anderson and Martha Wainwright to Marie Chouinard and Ken Lum.

She attended both the Can Serrat International Arts Residency in Spain, and the inaugural Momus Emerging Critics Residency in Montreal. Her independent directorial work includes the darkly comedic documentary Family Death Trip, and she has produced videos for the artist Basia Bulat, including the Prism Prize short-listed Your Girl.

“Tell someone that ‘family’ is the theme of a magazine that also features sexual imagery and you will get horrified gazes,” explains Rosenthal, “but that has a lot to do with how our society prioritizes the power of image over text.

“In a novel, the characters may both have sex lives and have family lives, the one on page 60 and the other on page 132. But place sexual images and a discussion of family life within the confines of one magazine and it somehow becomes transgressive.

“This issue of Rat Chat contests the idea that people with families are no longer entitled to embrace a broad spectrum of sexuality, or that discussion of any one aspect of life must exist siloed from others.”

In Montreal, it will be sold at the Centre PHI.

Things We Feel But Do Not Say

Photon Films snaps up PORTRAITS FROM A FIRE