If you think you know the WE story, you don’t know the whole story.

Canadaland Podcasts presents The White Saviors, an original series based on its 5-year investigation of the WE Organization.

Following its critically-acclaimed and award-winning series Thunder Bay and Cool Mules, Canadaland now brings its next major investigative podcast: the epic story of the rise and fall of WE Charity.

WE Charity was one of Canada’s biggest successes, ever – an international organization endorsed by A-list celebrities including Oprah, Sir Richard Branson, Prince Harry, Justin Bieber, and The Muppets. WE claimed access to kids in 17,000 schools around the world, and had multimillion dollar partnerships with Fortune 500 companies, along with political connections to everyone from the Clintons and the Trudeaus to the Communist Party of China.

Its founders, brothers Craig and Marc Kielburger, promoted themselves as “rock stars of social change.” They created a web of 32 different charitable and corporate entities, tax shelters, and shell companies.

WE blended and blurred charity with business like no one before them.

Then, in a matter of weeks, it all came crashing down.

Narrator Olusola Adeogun takes listeners through the incredible arc of WE, from its humble beginnings in a suburban home to the heights of fame and fortune, to the crucible of national scandal. The White Saviors features interviews with dozens of former WE employees, including top-level whistleblowers whose firsthand accounts have yet to be heard.

The White Saviors is a story of:

Outrageous wealth. After entering the non-profit sector, the Kielburger family amassed a personal fortune worth over $30M. WE may be the only charitable organization in the world that had its own string of 5-star luxury resorts, its own sprawling Arizona ranch, and lavish receptions in struggling countries for wealthy donors and celebrity friends. The Kielburgers did very well, when they were supposed to be doing good.

Deception: WE apologized to donors for misleading them about what their donations had paid for. But just how deep did the deception go? And where exactly are the 1,500+ schools that WE claims to have built overseas?

Crime: WE admitted that a member of its own senior management embezzled charity money and threatened to kill his co-worker. They accused another employee of extortion, and claim he was investigated for terrorism. Meanwhile, donors and politicians have called for WE itself to be investigated by law enforcement.

Exploitation: The White Saviors is more than a jaw-dropping story about a charity that took a wrong turn. It’s an examination of “non-profiteering” – the charity-industrial complex, the use of good works as PR to clean up the reputations of damaged brands, and the dangers of turning virtue into a product. As professor Firoze Manji puts it: “Saviors need victims.”

Finally, The White Saviors answers questions about what the Kielburgers are up to now and what has become of WE.

Spoiler alert: they’re still at it. 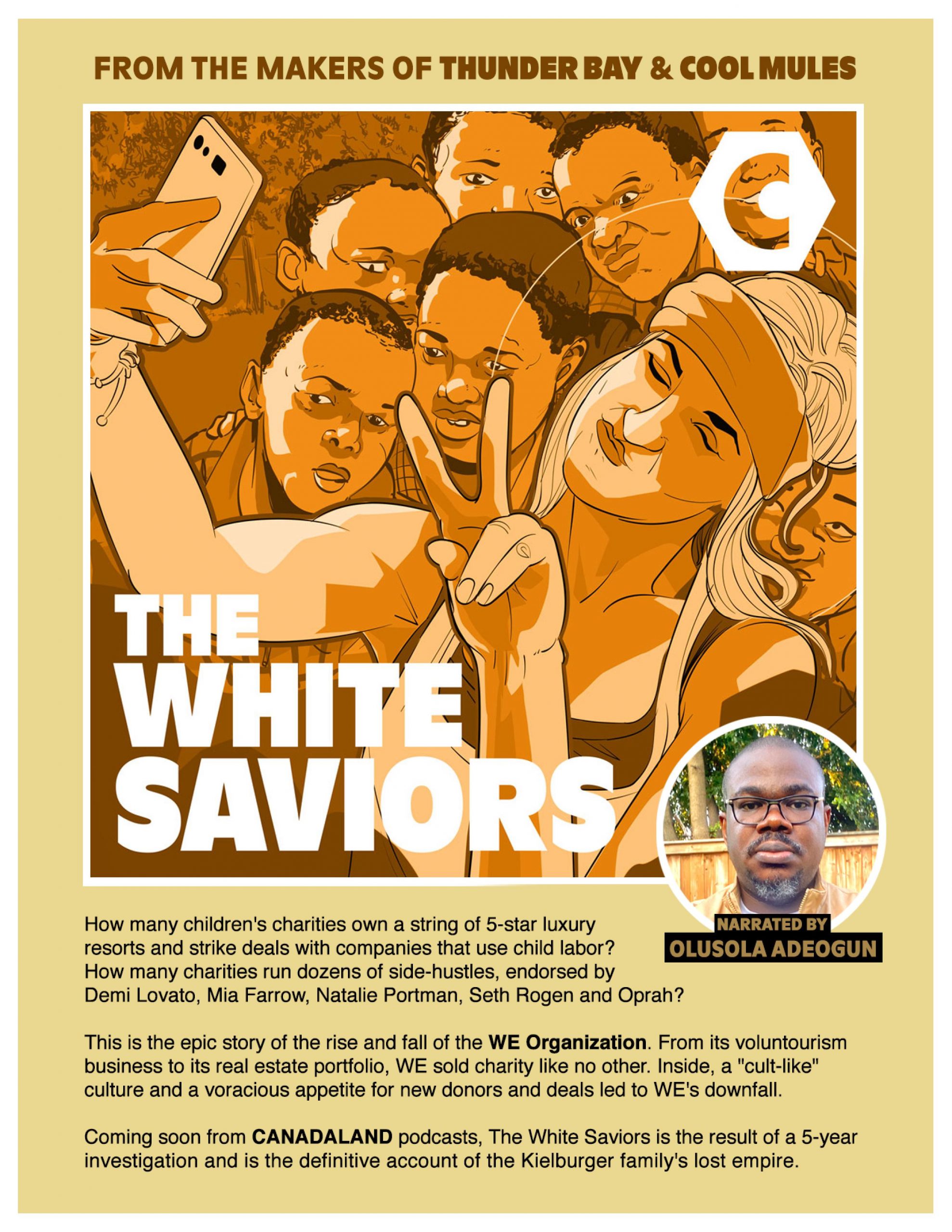 From Earth to Sky